Rent, “After New York Everywhere Else is a Pleasure Cruise” 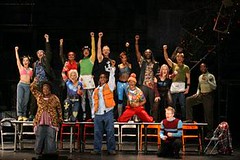 In 1996 Rent hit off-Broadway with a controversial thump.  Everyone was talking about the the rock musical that showed young artists living in alphabet city struggling with drug addiction and AIDS. I was intrigued but also perplexed: at the time New York was gritty, Alphabet City legitimately “rough”, “Bohemia” was enjoying a resurgence with young “creatives”, a mix of minorities who might have grown up in the city and white kids from Scarsdale  and Westport, shirking their parent’s conventional paths in favor of resurrecting a new version of the Beats just east of their original café hangouts (which had been plowed over by Marc Jacobs and Alexander McQueen). The subjects of the musical were my friends; their dreams playing out some tragically, some successfully everyday. Why would you want to sing and dance about them? With that logic I opted out of seeing it back then, skipped it when it hit Broadway, and ultimately passed on the big screen event all the while wondering, Did I miss something? Tuesday night I finally put the curiosity to rest at the Bass Concert Hall.

The Bass Concert Hall has recently been renovated (admittedly I hadn’t seen it before the renovation) to accommodate musical theater, apparently something it couldn’t do well before.  In addition to the new acoustics, perhaps the Hall’s most exciting addition is the sculptures on loan from the Metropolitan Museum of Art. Eyes a striking marble piece by Louise Bourgeois greets you when you enter. All of the works vary in medium and tone, a haunting The Swan’s Dream of Leda by David Hare can be found on the same floor as the comparatively serene Column of Peace (sadly, their signifacace was largely passed over several patrons who repeatedly used the base of one to hold their cocktails). There are two bars on each of the three open floors (they don’t have snacks but there is a vending machine just out the doors on the way to the Fine Arts Library), and plenty of comfortable seating (think hip hotel lobby). A wall gallery featuring the artists Jared Dunten and Marty Butler lead diners to a modern café on the second level. The combination of dining, drinking, and art perusing in a bright and airy setting invites theater goers to come early and make a night of it.  It’s a great way to spend an evening.

The theater itself is massive and on opening night was packed—more than you could say for a Tuesday night on Broadway these days. The two leads, Adam Pascal and Anthony Rapp, took the stage to enthusiastic cheers. Along with their fellow cast members, they returned the enthusiasm and kept the energy at a maximum as they sang their hearts out over the next two hours. Many of them have been performing Rent since its inception and the comfort and ease with which they inhabit their characters is compelling. For the leads, now stars in their own right, (with self titled CDs and memoirs available) their performances have the feel of a rock/pop concert, complete with head set (an unfortunate but necessary distraction). While the themes are no less jarring–AIDS, drugs, homelessness–New York has lost much of its bohemian grittiness (although there is talk of it making a comeback with the country’s latest economic bust) and the play serves as an accurate history lesson about a genre specific far away time in a far away place. Most of the audience seemed to be indifferent to the show’s relevance, there instead to sing along and be part of the musical sensation, cult status experience that is Rent. And despite my I-was-there-I-don’t-get-it instinct, you can’t help but see why. The songs are infectious and fun, heart sweeping and tear inducing. And with no more than five lines of dialogue in between, you are along for the ride.

Rent is part of the Broadway Across America series and will be performed through May 17th. BAA will present Wicked next, also at the Bass Concert Hall,  from August 12th-30th. Tickets go on sale this Saturday, May 16th.

Hot Time in the Old Town Tonight
Next