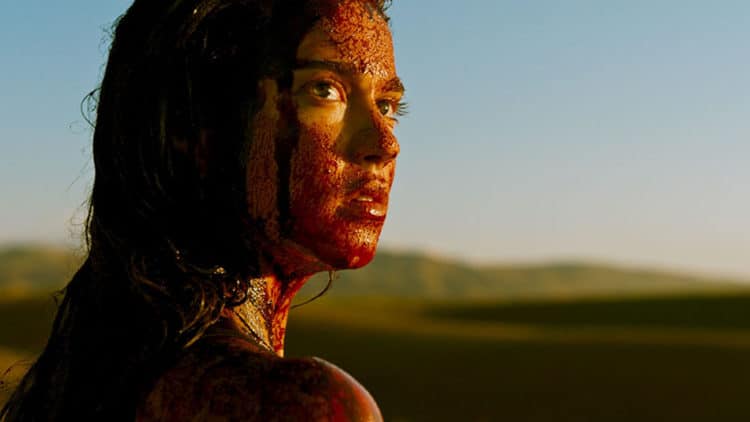 Arguably one of my favorite films this year. It’s polished yet full of grit, straightforward with the violence, and oh so rewarding. French writer/director Coralie Fargeat was in attendance for the screening and indicated how important she felt the movie was this year in particular, based on the controversy regarding Tim League re-hiring Birth.Death.Movies editor, Devin Faraci, who previously resigned over a sexual assault claim. Fargeat is a strong advocate for women speaking up when violated and Revenge is definite proof.

Jen (Matilda Anna Ingrid Lutz) is a mistress for a rich socialite, Richard (Kevin Janssens), who fly’s the two of them out to his secluded desert house for a quick getaway. Jen getting off the chopper sporting a lollypop in her mouth a la Lolita and bright pink earrings. She is as seductive as she wants to be, but that’s entirely her prerogative. When Richard’s hunting buddies meet them at the home for their annual hunting trip, creep vibes get turned up. His pals can’t seem to stop drooling and smiling at the beautiful Jen. After a night of dancing and partying, one of them starts to make advances on Jen. When she rejects him, he rapes her and when Richard finds out, he does nothing short of threatening her after Jen mentions his wife. Richard attempts to kill Jen by pushing her off a cliff. Miraculously after being impaled, Jen survives and plots her, that’s right, revenge. Frantic and then calculated, Jen begins to hunt the hunters.

Sounds like a fairly run of the mill revenge story, but somehow Fargeat and her actors brilliantly breathe life into this genre. The gore and practical effects are really top notch. I’m curious to see what Fargeat has cooking for future films. Definitely one to watch out for in my book.