Rodney Crowell, in concert, at ACL Live @ The Moody Theater 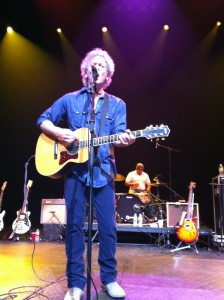 Austin TX – In a word, storytelling. That set the scene for Grammy Award-winning musician, Rodney Crowell. In concert Friday night at the ACL Live Moody Theater, Crowell showed off his musical songwriting and playing chops, while shifting seamlessly from alternative to mainstream country music. Crowell’s songs, painting pictures of life, were interlaced with style that echoes his early musical influences, Guy Clark and Townes Van Zandt to be sure. Evening set, the polite yet excited crowd enjoying every moment, the show had lift off. Crowell played fan favorites, “Stars on the Water”, and “Victim or a Fool” to name a few, but more than that, it was the intimacy of the singer songwriter and his band with the audience that was profound. The musicianship was lock step. Yes, that good. Having not seen Crowell in a live performance before, I was somewhat skeptical. After the guitar solo on “She’s Crazy for Leavin”, I knew better. Being a newcomer to the Rodney Crowell experience, I asked a fan, what’s the appeal? His reply, “I feel like this guy is telling the story of my life”. There you go. Now it makes sense. In listening to the remaining songs of Crowell’s set, I could feel myself becoming mindful of my own life, the people close to me, the heartaches, highs and lows, all of it. Crowell’s songs are a journey, his shows even more so. In a word, storytelling.