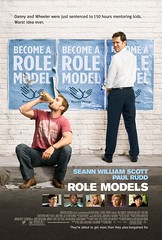 In the wake of an historic world economic disaster, the N.Y. Times in an article on their front page this morning posed this question: as Americans have watched their 401(k)’s shrivel in recent weeks, how should entertainment executives best reflect the global economic crisis in movie and television story lines, or should they not bring the topic up at all?

The answer: do as Paul Rudd, David Wain, Ken Marino, and Timothy Dawling have done. Write a sharp witty comedy about a guy, who after being beat down by American conventionalism, wakes up one morning and decides to kick it swiftly in the ass. Danny Donahue is Joe Everyman celebrating his 10 year anniversary as Guy-Who-Played-It-Safe-And-Hates-Life. His girlfriend (the lovely Elizabeth Banks) declares him miserable and dumps him an event that sets Danny off on a journey of reckless abandonment and accessing of his inner child. And yes, ultimately, with cued music, Danny will discover what it means to be alive. And no, I promise you won’t feel like vomiting in your shoes. Why? Partly because it’s a smartly funny film that keeps the edges of its sentimentality rough enough to earn it an R rating (that’s a good thing), partly because of the lethal comic combination that is Paul Rudd, Seann William Scott, Jayne Lynch, the brilliant and unstoppable Bobb’e J. Thompson, and the wonderfully talented Christopher Mintz-Plasse, and partly because, in this crazy tumbling world we are living in, the seemingly hokey, “Do what makes you happy” message has never rung so true. Role Models is the perfect antidote to this country’s current collective pain. So laugh, because you did everything right with your 401k and it’s gone; laugh because you thought your 9-5, even though you hated it, was for life; laugh because the stock market crashed 900 points; laugh because it just went up 500, and then laugh because in the end, what does it all mean anyway. As for the entertainment execs trying to figure out what makes the perfect It’s-a-Depression-Again Movie, I recommend Role Models.