She is the female James Brown of soul and responsible for leading the soul/funk/R&B revival. She’s been doing her thing for 13 years and the rest of the world is finally taking notice. With a voice to be reckoned with, Sharon Jones can no longer be ignored.

AUSTIN DAZE: When did you know that this was what you wanted to be doing?

SHARON JONES: I didn’t think that I was going to be doing this until the 80s and 90s. All my life I would get inspired by gospel and just singing but the main thing, when I knew that the funk and soul was it, was when I met Gabe almost 13 years ago. I went in to do background on an album and once I finished I was like, “That’s good music these guys are playing.” Then the first time we went to London I opened up for Maceo Parker and that’s when I knew, I knew that this was it. Because I had a title–people were calling me the female James Brown and I had never heard them call any other woman the female James Brown. I never heard them call anyone the Queen of Funk. I know Aretha is the Queen of Soul. So I thought, this is something here; I better stick with this.

AD: And before that you were a corrections officer. 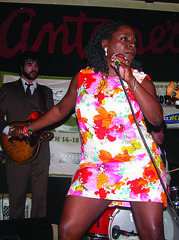 AD: Growing up, was there a type of music that you were particularly drawn to?

AD: Your albums have a distinct stripped down sound. Tell me a little bit about the recording process.

SJ: As far as our songs sound that’s on Gabe . The sound that we get–people say we sound like we recorded back in the day–is because the studio that we record in is like back in the day. Our studio is analog; we don’t have any digital stuff up in there. We use a bunch of tapes like they used to use back in the day. When we record we record, we record live the whole day. The band is in the room and we record everything like they did back in the day. Sometimes we might add the horns in later on or sometimes I might go in to lead over certain songs depending on how I feel but mostly, yeah, it’s analog which is how we get that sound that you like. We got old equipment in there. Everybody is always like, “How did you do the album? What were you thinking about? Is the album going to sound better than the other one?” We weren’t thinking about whether the album sounded better than the first one we were just thinking, “Wow these songs sound great.”  We recorded them; We listened to it and it will be, “Nah, that’s not right.” We can’t over think it. Like a song on 100 Days, 100 Nights. There was a song that was almost not on the album because we couldn’t figure out how to do it. Every time we would do the song it wasn’t right. We did it at one speed and it didn’t work. Then we slowed it down, and it was like, “Nah.” Then it was like, “Well what if we speed it up and make it half fast, half slow.” Then it was great. You just have to find it. Some songs you don’t find it and you put them aside until maybe the next album and we will pick it up again or sometimes we never even use it.

AD: Your shows are pretty amazing. What makes a good show for you?

SJ: Me and the Dap Kings getting on that stage and enjoying what we are doing. I love when I’m on that stage singing and they love when they are out there playing. We just got to put a show on for people and we have fun.

AD: What’s next for you? I know you’ve been touring a bunch.

SJ: We are leaving for Australia on Friday for three and a half weeks or something like that. After that I would have to look at my calendar—I only can go month by month. I think we are going to be doing some Europe tour stuff. We got a busy schedule.

AD: How does Europe respond to you?

SJ: Oh they love us. That’s our biggest crowd. They love us at the festivals. Even in the states now every club we’ve been going to we’ve been selling out. Before it wasn’t like that. Since October the 6th we’ve been on the road and I think out of all of those shows I think maybe 2 didn’t sell out. It’s been great.

AD: I actually read somewhere that you are responsible for spearheading a revivalist funk and soul movement. What does that mean to you?

SJ: That’s great. We are. They are only telling the truth. It’s just what we stuck with, you know? Now you’ve got all these other indie record labels and all these other bands doing it, so it’s good. These major labels are trying to do it the best way that they can. They are all trying to revive it. We started doing our stuff in ‘85, ‘86 and now we are in 2008. I think the first album came out then. 13 years we’ve been sticking with that soul and R&B. And you have everybody coming behind the Dap Kings and they want them for that sound and have been coming to me because they want me to do some singing. It’s all good. I can’t say we started it but let me tell you, 13 years ago there were only two or three people trying to do this R&B stuff and now I couldn’t tell you how many are doing it. I couldn’t even tell you.

AD: You’re music career started later than most. Any thoughts on that?
SJ: With me, I really consider it a gift. God has given me a gift; I feel gifted. A lot of kids out there, if they have talent, you will know if it’s for real. A lot of times they will push you because you’re cute. If you can’t hold up what they want you to you won’t make it. They can put you on a record and they can enhance you, and turn that knob, and make you seem like something, but when you get live and you’ve got to get out there and you can’t put it out there that means that you don’t have that gift. Wisdom to the people: if you got it, no matter what anyone tells you, if you stick to your beliefs, you stick to your heart, and if it is for real and it is true it’s going to come out. You’ve got to stick with it. Don’t give it up. That’s what happened for me. By them telling me that I didn’t have this and that but I knew God gave me a gift and I knew I could sing. I knew that if people could just hear and see me they were going to like it. That’s what is happening now. People are seeing more of me and they are hearing more of me now and I’m being accepted. So anyone with a gift, just hang in there. Don’t let anyone turn you around. Just follow your heart and don’t ever give up. Don’t ever give up on what is your dream.***