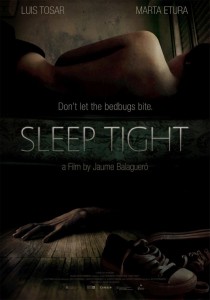 Have you ever woke up in a bad mood and resented your neighbors and co-workers who seem deliriously happy to be up-and-at-em first thing in the morning? The more chipper they are, the more you want to kill them?

Well, meet Cesar (Luis Tosar), a lonely concierge at an upscale Barcelona apartment building. He doesn’t so much want to kill the shiny, happy people that live in his building. He wants to make them so deeply miserable as to wipe the smiles off of their faces forever.

Director Jauma Balaguero is best known for horror films that take place in single-location settings (“Fragile”, “Rec”, “Rec 2”), but while those films rely on creepy interiors to create a sense of claustrophobic unease, “Sleep Tight” takes place in an open, sunny building that seems (aside from the hired help) a lovely place to live. It’s the interior of Cesar’s mind that provides the chills.

Cesar’s misanthropy extends to everyone around him, but he’s particularly fixated on the incessantly perky and pretty Clara (Marta Etura). He sneaks into her apartment by day and night, doing things that I won’t tell you. Suffice to say, I will be checking behind my shower curtain and under my bed when I come home from now on.

There’s a bratty little girl in the building who has caught wise to Cesar’s shenanigans at Clara’s place and she blackmails him for cash and “adult movies” in exchange for her silence. It is in this relationship and some of the technical choices of the film that its point of view can be a bit stomach-turning. For example, the bratty neighbor subplot seems to exist solely to add tension around the concern that Cesar might be found out. And there are music cues that indicate that the audience, at least subconsciously, is meant to be on the edge of their seats for Cesar when he is about to be caught in Clara’s apartment. None of the characters who threaten to get in Cesar’s way are portrayed with any sympathy. In truth, though his actions are abhorrent and utterly cringe-inducing, this is Cesar’s story all the way. We’re not exactly meant to root for him, but it does seem as though we’re meant to want to see his master plan play out in full.

And play out, it does.

There is a particularly gory scene that gives the film its obligatory splatter moment, but it’s the psychological cruelty that really makes the lasting impression here. The scene in which Cesar tells an elderly tenant just how little her life means to those around her, in the kindest of tones but coldest of words, is much more eviscerating than any slasher moment could ever be. It’s one thing to watch fake blood splatter on a wall. It’s something else entirely to watch cruel truth shatter a kind spirit. And the film goes one further: the final scene of “Sleep Tight” is so emotionally sadistic that it will stick with you for a long while.

Balaguero wields Hitchcockian techniques in new and twisted ways. This is a masterfully crafted psychological creep-out, and certainly not for the faint of heart.

"The Corridor", a Fantastic Fest Review
Next