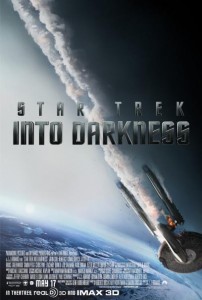 It’s official: the summer movie season is now upon us. As if this fact was not already apparent with the somewhat early release of Iron Man 3 several weeks ago and last week’s big opener the Baz Luhrmann spectacle The Great Gatsby, it should be solidified by this point with the release of JJ Abrams’s Star Trek: Into Darkness, the much anticipated sequel to his 2009 reboot of the legendary sci-fi franchise. The massive hype machine leading up to this week’s opening was fueled by much speculation and rumor; producers have been for the most part mum on many key aspects of the film and its plot, with a few tantalizing hints dropped along the way to add to the frenzy. The internet has been abuzz for months with theory and expectations have been high. So what’s the verdict?
It was alright, I guess.
To be sure, the bar was set pretty high with both its immediate cinematic predecessor and its forebears in both television and film setting the standards to live up to. I myself am a longtime fan of both the Star Trek television series (Ben Sisko, FTW) and the new canon set in the alternate timeline established by the first Abrams helmed movie. It might be unfair for any film to have such rigid standards and expectations laid on it before it’s even written; the film obviously has a built in fan base that has been amassing for over 40 years to contend with, in addition to legions of new recruits thanks to the last movie which is often considered the most accessible of any previous Star Trek effort. The producers of the film are in a way constrained by attempting to please long term fans by sharing old favorites in new ways while making the film accessible to all film goers. They do a fine job and walking this line, but the movie suffers because of it.
As a Trekkie (Roddenberry didn’t like Trekker and neither do I) I have a suggestion for Abrams and the creators of the current Star Trek canon: stop trying to kowtow to us. Seriously, just leave us out of the equation all together and focus on making an awesome movie. I promise you, we’ll understand and even love you a little more because of it. Oh sure, it’s awesome to see references and in jokes and nods, and as a Trekkie it’s nice to see I’m being acknowledged, but you’re kind of limiting yourselves. You’ve already established that this is a new universe completely autonomous from the one first established in the original Star Trek series.
The attempts of Star Trek: Into Darkness to incorporate familiar scenes and characters into this universe caused the film to become somewhat muddled, confusing itself in the process. By now, it’s probably no secret who the mysterious antagonist of Captain James Tiberius Kirk (Chris Pine) is, but I’ll do you a solid and refuse to name names here. The villain (Benedict Cumberbatch, who is fantastic as ever) leads a freshly chastised Kirk on a galactic manhunt that opens the door to an even larger and more mysterious plot against the Federation. All of this sounds good on paper, but the end result is a film that never quite figures out what movie it wants to be.
Despite coming in at around 2 hour and 12 minutes, the film felt rushed. One minute Kirk is disgraced by Starfleet, the next minute he’s the best man for the job; allegiances are formed and broken just when they start to be interesting. Throughout the film, little hints of awesome are dropped along the way. Long term fans might get excited at the mention of Section 31 (think Federation black ops, for all you newbies out there) but then nothing ever comes from that. And that, my friends, is sort of a metaphor for the entire movie. Things are suggested but then never delivered. Interesting things happen, but mostly only for a minute or two and they turn out to be inconsequential.
I have a feeling that there might be an amazing 3 hour long cut of this film sitting somewhere waiting for a Special Edition Blu-Ray release. This is pure conjecture on my part, but so much of this movie remained unfleshed out and I can’t really believe Abrams didn’t think to address this. Maybe I’m too much of a fanboy and I might be seeing things through those eyes but no matter what I do I can’t make myself believe that there’s not some fantastic exposition that didn’t make the theatrical cut of this movie. But maybe I’m just deluding myself.
In the end, Into Darkness is not a bad movie. Despite its flaws, it’s actually a pretty decent movie. It’s just never quite the movie it wanted to be or, in fact, needed to be. This movie tries so hard to be amazing but doesn’t ever get there and that’s sort of the problem. Instead of reaching the stars, it barely breaks orbit, boldly going to places we’ve seen before.

Getting Through The Daughter
Next