Daisy: Last time I saw Street Dogs, you were opening for Tiger Army. 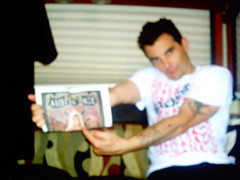 MM: Was it Red? We’ve been on a lot of tours, so forgive me. It becomes like a blur sometimes. That was an excellent tour. And truth be told, when we play in Texas, Austin always goes off whether we’re playing Red 7 or Emo’s. It’s always been good to us, whether we’re doing tour support or headlining.

DR: What has the band been up to since then?

MM: Since touring with Tiger Army, we worked on a brand new record, we toured with Anti-Flag, we did the Vans Warped Tour. Did a couple shows after the Warped Tour, a union convention show in Montreal for the United Food Commercial Workers. Played at Red Rocks for the first annual Punk Rocks show with NOFX, The Mighty Mighty Bosstones, Bouncing Souls and Frontside Five. Now, this is the second show of the State of Grace tour. The first show was supposed to be in Houston, but because of Hurricane Ike, we rescheduled that. So last night in Dallas at the House of Blues was the first show, which was great. Tonight we played at Red 7 and it was a great show. Considering what was going on weather wise it was well attended and people went crazy. People have a lot of stamina in Austin. The deal with that heat just blows my mind. It’s a testament to how good our fans are and the people here as well.

DR: Tell us about the making of the new State of Grace album.

MM: When we made this record, we tried to shake things up a bit, expand sonically, try a couple of things we might not have tried before and do things topically that we might not have done before. Say for instance on a song like “Guns.” That’s a different feel, a different topic, a different subject. Sonically, it’s a lot different than anything we’ve ever done before. We’re really proud of that song. Songs like “San Patricios” are different sonically. We stretch out the parameters of our singing and had guest vocalist Rudy Johnson come in and sing in Spanish. We wanted to smash the template up a little bit, but yet stay true to ourselves. I think we managed to do that and make an organic and personal record. We talk about the people in our lives that mean something to us; we talk about the world and how we see it and how things aren’t so great. (Laughter) I think everybody kind of gets that. It’s definitely an introspective record for sure, and it’s up with the times as well.

DR: Do you write the material collectively as a group?

MM: The last two efforts under Ted Hutt, Fading American Dream and State of Grace are probably the most cumulative group efforts. Everybody had a say about lyric and sounds, and everybody’s ideas were put in and considered and tried. That can be time consuming, and of course personalities clash and egos clash, things of that nature. But I think ultimately we come to find in our eleven songs that the best ideas won. We feel like we put forward eleven really good songs, and an album that has cohesion, is well sequenced and you can listen to it in its entirety.  We put it out on vinyl as well, and we feel really strongly about it. The record challenges the group too. As a singer I’ve never been more challenged by songs, they’re in a higher key, and I think everybody, from Marcus to John, Paul and Tobe were challenged on this record. These songs challenge our chops. We’re working on wrapping our heads around it.

DR: What is your personal approach to songwriting?

MM: For me, it’s all about hearing the melody in my head, and where I could be inspired by something. On my phone I’ve just been amassing lyrics and ideas. Even in the wake of releasing State of Grace I have new ideas and new lyrics. I know Marcus does the same and I know Johnny does the same. I think Nate Albert, who assisted us producing Savin Hill and Back to the World said to stay active, keep the mind moving, write things down and record things. Record a riff, record an idea. Get it into Garageband or into ProTools. Write the lyrics down. The more ideas you amass, the more you put forward, the more likely you’ll have eleven or twelve good ideas at the end of the day. That’s been our mantra, and that’s sustained and helped us out when we’ve made records. I really believe we’ve made four good records. Certainly, you want the last to be the best one, and I think it’s State of Grace.

DR: The spirit of punk rock seems very important to you. What started that with you and what does it mean to you?

MM: I think it started in Boston, Massachusetts in clubs like the Rathskeller, The Channel, TT The Bears, The Middle East. Just seeing bands like the Mighty Mighty Bosstones, seeing the Bruisers, the Ducky Boys, the Unseen. Everybody was salt of the earth type people, no frills, no bullshit, no pretension. Just real shoot from the hip, look you in the eye type people. That’s sort of always been the mantra or the ethos of Boston and the Boston punk rock scene. Give everything you have, lay your cards down on the table, be accessible and be kind and humane and do the best you can. So that’s what I was brought up under. You know, be grateful, be humble and always take time out for the fans that took time and money out of their lives to come see you, which in today’s society is tougher than ever. Clearly we’re in extraordinarily difficult economic times. Fannie Mae and Freddie Mac (mortgage lenders) just got taken over by the government; Lehman Brothers is looking for a bailout. The jobless rate is horrible. Things are rough.

DR: Do you think those circumstances are much different for people than when the punk movement started in the 70’s, as far as the average working class kid is concerned?

MM: I think it was more organic and more in touch with the political climate, the struggles against a government that was out of touch than this music movement is in touch with what’s going on now. I think a lot of people tuned out.

DR: Tuned out of politics?

MM: Yeah, just tuned out of everything. Post 9/11, things have shifted and changed dramatically and I think it’s important for people to walk away from fear and reengage and try to get involved. Get off the bench in life and do something good and positive that can change the world, your neighborhood or help somebody out. I feel like that’s missing a lot these days. Joe Strummer always talked about the value of people and the value of the collective effort of people getting together and try to work for change or just work for a week to help people out. That was always an example for us. That gave you an inspiration.

DR: You are both a firefighter and a veteran of the first Gulf War. On September 11, what were your thoughts?

MM: Back on September 11, 2001, I was working on a Congressional campaign to get now Congressman Stephen Lynch elected to his Congressional district in Boston, Massachusetts, and I was at a polling precinct when I saw the first plane go into the World Trade Center on TV and then the second one in real time. My first thing to do was basically call our firehouse and see what the deal was. I volunteered immediately should we have had to go down there. I wanted in on that. I think me and this guy John Dooley were the first guys to sign up on the volunteer list to go down to New York. We were FFOP at the time, so we weren’t allowed to go down there, but if I were out of my probationary period, I would have been on that pile digging. I would have been right there.  Instead, I went to a lot of funerals for firefighters. They were difficult, horrific, sad, a tough time. One thing I learned really quickly was how brilliant, how resilient and how powerful and breathtakingly amazing the people of New York are. Just from that experience of having gone to all of those funerals, the hospitality of New Yorkers, there was something in the air. The people were selfless and being kind. Something got lost after that. That got lost in the politics of fear shoved in everybody’s face, but that’s a story for another day.

DR: Let’s talk some about the new single, “Two Angry Kids.” Is that about anyone in particular?

MM: It’s about a friend who pulled me out of a tough situation. I was about to make a real bad decision and he stuck a finger in my chest, threw me up against a wall and said, “You don’t have to make that decision.” It’s a song about being in a rough place, having been through some rough things and then having somebody who knows your ilk and your kind, who is hip to the streets, sticking a finger in my chest and telling me I didn’t have to go where I was going to go. I’m forever grateful about that. I’ll just leave it right there.

DR: Ok, so we’ll move on to your Boston Red Sox. Can they catch the Rays?

MM: Yes! I think it’s going to be hotly contested all the way to the end. At the bare minimum, we’ll get the wild card. I’m going to the game September 27th at Fenway. I’ve got grandstand seats behind home plate and I can’t wait. Fenway Park is one of my favorite places on earth.

DR: Are you a Patriots fan too?

MM: Yeah, and I still think the Patriots are going to have a winning record. I think Cassel knows the system, he’s been there for four years, he’s healthy. He’s a coaches quarterback, he knows the plays. If he’s got a little mobility in the pocket and can avoid getting hit, we’ll be fine.

THE STORM IS COMING AGAIN
Next