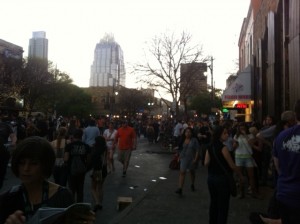 We started out the day by heading downtown to out the madness around the 6th street area.  There was definitely not a lack of mobs of people and street musicians.  It was pretty hectic and crowded with music lovers from all genres waiting for lines, crowding street acts and just taking time to look around and people watch was pretty entertaining.There’s some pictures at the of the crowds (as best as I could capture them) as well as the music that we saw last night throughout.  We went and checked out the big Doritos stage.  We hung out around there to check out the scene and grab some free giveaways. 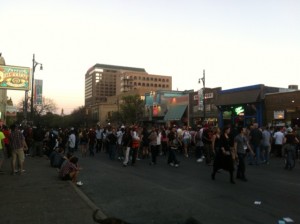 Then we headed over to the Stage on Sixth to check out the lineup and see the possibility of checking out Eric Burdon of the Animals.  We were waiting outside the venue then Russ made the executive decision to check out the Holy Mountain for his birthday party and see some NOLA bands rock out on the backyard stage.   Once again I was going into a venue blindly.  Before this trip I thought I knew a lot about music, but I don’t really know any of the bands that Russ and I are seeing.  For most of these artists, records don’t do them the justice that seeing them live provides.  We walked into the Holy Mountain Backyard and a band called the Revivalists were starting their set.  I haven’t ever heard anything like them live.  It was a mix of Jazz, Funk and Rock.  I’ve always wanted to se     e a musician who could play the pedal steel real well and so far I’ve seen 2 bands with players who have really put that wish into a reality.  The guy in the Revivalists who played the pedal steel and shredded on it the hardest I’ve ever seen.  I’ve never seen anyone’s hands move that fast and create such crazy solo riffs.  I’ve seen the instrument used in some country music, but never in a rock band like that, so hats off to the pedal steel player from the Revivalists, definitely a band I’m gonna look more into. 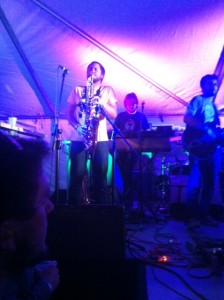 Next on stage were the Soul Rebels a big brass band from New Orleans.  They had so much soul to them.  The horns were perfectly in sync creating a real authentic jazzy atmosphere like I’ve never heard.  They did a few covers throughout with the full band, one of which was Billie Jean. 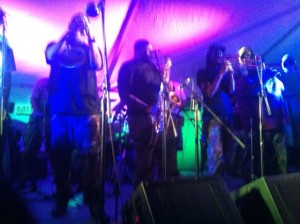 After, JJ Grey and the Mofro came on.  I heard great things about the band and JJ.  You could literally feel the soul, emotion, and inflection in this guys voice.  This, along with the instrumentation in the background really set up a great show.  There were some die hard fans there and I could finally understand what all the hype behind this band was.  There was a local guy playing guitar who had a couple mean solos throughout the songs. 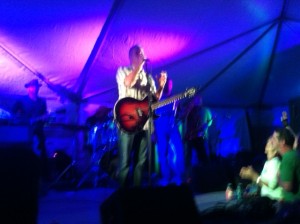 After JJ Grey, Dumpstafunk took the stage and played some of the funkiest grooves I’ve ever heard.  First of all it was probably the loudest concert I’ve been to.  Russ had us front row throughout the night, so the the funk was not just listened to, but felt very much so.  I had to give in and put an ear plug in for the last act because the funk was just too loud for me. 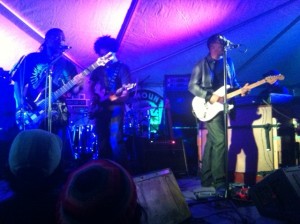 Dumpstafunk was the coolest funk band that I’ve seen.  The combination of the rhythms, the effects on the guitars, the thumping bass, and the effects on the electric guitar made the music more than just music.  It was an experience.  The house managers came up at around 2:15 am and had to shut down the set and close the place up.   They seemed pretty thrown off because in New Orleans you can play all night.  It was quite the night for music and probably my favorite night so far at SXSW and the experience so far has exceed my expectations greatly.

A terrifying new vision from Rob Zombie
Next