SXSW Interview: “Girl Model” filmmakers share a shocking secret about the making of their film

I met A. Sabin and David Redmon on the verandah of the Four Seasons Hotel overlooking Town Lake. Sabin is darkly beautiful and carries a quiet confidence, while David is a bit more intense. They look like the serious, award-winning documentarians they are, but that doesn’t stop them from getting distracted and a bit giddy when we’re joined on the terrace by a couple of celebrities posing for local press. After the excitement dies down and David and I discuss our shared roots in the DFW area, we dig in to the topic at hand: Girl Model, a film which documents the recruiting of under-age girls in remote Siberia for modeling in Japan.

Three-quarters of the way into our interview, things take a dark and unexpected turn, but we began with some background on the story. 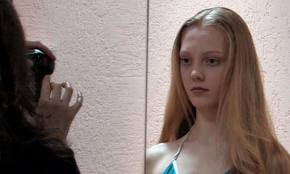 DW: How did you first hear about this agency doing cattle calls in Siberia?

AS: We were approached in 2007 by Ashley, the model scout. At that point she sent us an email and the story was about modeling and prostitution, and the fine line between both. But our style of filmmaking is verite so we document events as they unfold. For us that creates a complexity in the story. So we had obvious concerns that she said this is the story that I think you should follow. We sort of pulled back and said we don’t want to make an investigative piece. But that’s how we initially got the story through Ashley and then it became something quite different.

DW:  I have to say that’s surprising to me because Ashley seems so conflicted about what she’s doing. It wouldn’t seem like she would approach you to open herself up like that.

AS: She’s complicated. I think that’s why audiences respond to her so strongly because they’re trying to figure her out, to understand her motivation.

DW: During shooting, was there ever any time where she tried to pull back or was she always open to you guys?

AS: She was both open and closed at the same time. (laughs) How she is in the film I think is how she is in person, which is, she’s divided. I think she’s a very good visual metaphor for the industry in general, an industry that, you know, has its problems but people want to turn a blind eye to those issues.

DW: One of the most memorable scenes in the film is when she goes to the apartment and both of the girls are there, and there’s just all this palpable tension. It seems like they feel they were brought there under false pretenses, and there she is trying to check in on them. What was it like to be in the room with that strange dynamic going on?

AS: It’s interesting because she had actually been texting me to bring the girls up to get measured and I’m not from the fashion industry nor do I really want these girls to be measured. It’s not my job. I’m just there documenting the situation so I texted her and said if you want the girls to get measured, come down and get them. I did not think she would, in fact, do that. So she did, and I think that scene really conveys how conflicted she is. She recognizes the difficulties these girls are experiencing because she experienced them herself as a model. And also, Nadya and Madlin are going through a really troubling period being in Japan, not being able to communicate their problems, being isolated. So they wanna tell her, hey listen, we’re not getting real work but that’s not how it’s coming out. It’s one of those ‘lost in translation’ moments. They’re so young and going through this in a very adult world. I don’t think it’s always clear to them what’s actually going on.

DW: One of the things that’s troubling to me in the beginning is that these parents are even willing to send their daughters away like this. I understand they have financial difficulties, but what was your sense about why they thought that was okay?

DR: Well, I mean, the agency gave them a contract. The contract was in Japanese and English, but they speak Russian, right? But they were also told that their daughter will make $8000, and that numerous girls have gone over there and made lots of money. We didn’t find any of those girls, otherwise we’d have them in the movie. But I think, if you look at it from their point of view, it’s also an opportunity for their daughter to go overseas and experience things they never could.

DW: In the cattle call you see all these girls lined up and it really didn’t look like what you’d expect, especially if it happened in America where they might be proud of their bodies. Instead, they’re all kind of insecure. Did you get a sense that most of them were pushed to be there, or that they wanted to be there?

AS: I think it’s a combination. That’s what I’m hoping audiences connect to. When people see the film they want to point a finger at one firm or one company, but that’s why we’re pretty firm in believing that our film is not an expose. It’s not meant to uncover this dark side. It’s really meant to show a bigger story of the glamour industry and how we’re all part of it. Consumers, the models, the agents, the models’ families. I think that driving force of glamour is so pervasive in all of our cultures, that it really at a young age forms your understanding about what it is to be a woman. It kind of blinds you to the reality. Her hopes are contrasted against the reality. To me, that’s more nuanced as opposed to saying, “This person is why this is all going on.” Well, no, it’s really a bigger story about the culture of glamour.

DW: There were a couple of times in the film when I felt that she was kind of protected in a way, alone in a strange city, because you guys were there. There’s that moment when she borrows your phone to call home, and I thought, maybe she’s fortunate that there’s other people around with a camera, and other girls are less fortunate being alone in the city by themselves. Did it seem that way to you?

AS: I also have a sense that much of the reason Nadya was sent home is because we were there with the cameras. She was sent back to Japan a couple of weeks after we left. So, the question really becomes, what are you trying to hide?

DW: There was that moment where the guy who owns the agency was asked what happens when they don’t get a modeling job, how are you making money off of them, and he completely blew off the question. And then we see the DVD they made of her where her makeup isn’t glamorous, it’s more whorish than anything. I mean, she’s completely sexualized at 13. It gives the really creepy feeling that there’s something else going on, there’s another piece of this puzzle that we’re not seeing…

AS: I think we really leave that open. And I mean, if something had been going on, and it could’ve been going on, there’s no way we could document that.

DR: I don’t think we would’ve.

AS: Because how do you document a young person being exploited like that, if there’s escorting going on or what. There’s no way we could’ve shown that. We have those questions and we raise them, but we don’t have answers.

DR: Let’s just put it out there: Our lives were threatened.

DR: So that’s another reason why we don’t get in to the questions that you’re asking.

DR: It will be interesting to see how this story protects Nadya, right? Because if anything goes wrong she’s known now. It’s going to be in theaters, it’s going to be on PBS and BBC. I wouldn’t be surprised if there’s a reaction to it where people say, “Oh look, Nadya’s actually doing well.” And I would say, “That’s wonderful. What about the other hundred?”

DW: Yeah, it looked like thousands of girls lined up there at the audition.

(An uncomfortable quiet settled over us, and I realized we’d gone as far as we could on the topic of what the agency is really up to. So I pressed on with a closing thought.)

DW: There’s a moment toward the end where Ashley tells a parent, “They always make money in Japan. They never come home in debt.” And I think that’s the only time we see her lie outright on camera. I’m assuming she’s seen the film… what was her reaction?

DR: Well that was the idea of editor, Darius. He found that clip and said, “What the hell are you guys doing? This belongs here.”

AS: She’s seen the movie but she didn’t comment on that at all.

DW: But she knew there was a camera on her. I can’t believe she said that.

DR: Her friend saw the movie just the other day in New York, he’s also a scout and he said the same thing: “What was she thinking? I was a scout. I was a booker. Why would she ever say that?”

DW: Maybe there’s a part of her subconscious that wanted it out? There’s that whole thing with her growing tumors and having them cut out… they say you can actually make yourself sick with guilt. I hope she finds something else to do for a living because she’s a bright and beautiful woman. I really hope she goes on to something else.

DR: She has. It’s with a bigger agency in Japan.

AS: She’s gotten deeper into it.

DW: (crushed) Oh no, that’s not what I was hoping.

DW: So what are you working on next?

DR: A film called Down East that premieres at Tribeca next month. It’s a feature documentary set in Maine about the last sardine cannery. The factory shut down, so we went there to document what’s going to happen to the building, and then suddenly someone came in and bought it. So we document his story of trying to transform this factory. It bodes well for manufacturing in the U.S.

DW: Great, that’s very timely. Well, thank you both so much. I know the schedules are crazy.

AS: I’m just glad we were able to connect. Thank you.

DR: It’s perfect. Almost 3:30. Just in time for that screening we’re going to.

AS: Cool. Thanks again.

(As they left and I had a moment to collect my thoughts, the truth of the film became crystal clear. There is, for me, no mystery at all.)

Girl Model will broadcast on the PBS series POV in 2012.
Here is a trailer of the film.