SXSW Interview: Kay McConaughey Raised A Good Boy and Some Hell Along the Way 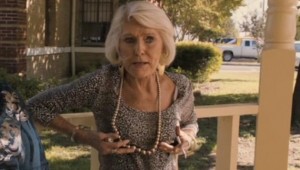 Kay McConaughey (affectionately known as K-Mac) plays a small town gossip in the new film Bernie, directed by family friend Richard Linklater, and co-starring her son Matthew, whom you may have heard of.

Her character, Tassie, is one of the more memorable “locals” through which the film’s narrative is told. She plays a ballsy gal with plenty to say and steals the movie in her few brief scenes.

I sat down with K-Mac in the Lobby Lounge restaurant in the Four Seasons Hotel while SXSW frenzy buzzed around us. Looking nowhere near her 80 years and having more energy than most kids I know, she chatted about the movie, her book, her famous son, and being a grandma.

DW: I’ve just come out of a roundtable interview with Matthew and Richard. They talked about you…

KM: (laughs) Yeah, well, Richard’s so low-key and sweet. I hope I get to see him in a suit before I die. I’ve never seen him in a suit no matter what the premiere is and I go to all of his.

DW: How did you get involved with the film Bernie?

KM: Rick called me and said, “There’s a part for you in this movie Bernie and I cannot imagine anybody playing Tassie but you.” I’m good friends with him and his family so it’s not like… I mean he just comes right out and says, “It’s you, K-Mac. It’s got you all over it.” So he emailed it to me and I said, “Rick, you’re right. That sounds like me.” I said I’d love to do it.

DW: The part you play is one of the townspeople, one of the gossips, and it all seems so natural. Was it ad-libbed or scripted?

DW: Well, that explains it. (laughs)

KM: It was so easy to do. I don’t mean to make it sound like I’m a pro, I was just so comfortable, you know.

DW: Well, your character weighs in a lot on the crime and the two lead characters. What do you think about Bernie and Mrs. Nugent?

KM: I wish he’d gotten a lighter sentence. I mean, she’d be enough to drive anybody crazy. Have you seen the movie?

DW: Getting away from the movie a bit, I know that you’re a grandma…

KM: And a great-grandma, too!

DW: Wow, congrats on that. Are you a traditional kind of cookies-and-milk grandma…?

KM: NO! Not at all! But, I mean, they don’t try me. They’re very respectful to me and I can’t imagine them talking back to me. But they’re always happy to see me because I do the fun stuff. Levi (Matthew’s son) loves to role-play and he’s only 3. I say, come on let’s go, and he says, “Is the big black car gonna pick us up?”

KM: Right (laughs), but he’s very imaginative. I’ll say, “Where should we go.” And he’ll say, “Brazil.” And then he wants me to tell a story that we can act out. Now Vida (Matthew’s daughter, 2) is gettin’ to be the same way. Levi will say, “Ma-Mac, Ma-Mac, tell me a story.” And I say, “Where should we go to tell this story?” and he says, “Under the piano?” So there we go, under the piano or under the pool table. Just us on an adventure. That’s how we go. No, I’m not baking cookies and all of that. That’s not me.

DW: You wrote a book called, “I Amaze Myself.” Do you have any plans to write more?

KM: No, it was fun but I don’t want to do it anymore. It’s time-consuming. I have a partner now. We travel. And I mean, I self-published this and it was a lot of work. Book signings, Kiwanis Club, Lions Club, you name it.

DW: So you were your own publicist and all of that?

KM: Yeah, it was a lot of work and I’m done with it now. I did it because I would tell stories to and about my kids and some of the things I’ve gotten away with… that I have no shame about. Like I always say, I’ve been thrown out of better places. So I had stories to tell, but there’s no trying to please everybody. And I’m just happy being me.

DW: That’s the only way to live it.

KM: The only way. 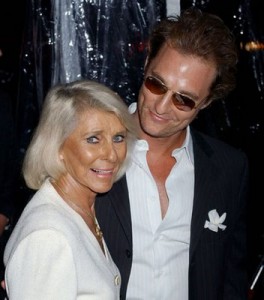 KM: The best thing is I get to go to great places. We went to Africa, Italy. Matthew is so good about flying us over and my partner gets to come, too. That’s the best part, getting to see places I would never have been able to.

DW: You get to see the world…

KM: Yes, he’s very good about that and always has been. And I guess the worst part, it’s not really a bad thing, but I don’t like it when we’re someplace and people come up to talk to him and they take him away from his family, from us. Like at a premiere or something, we go in first and then he has his time and does his thing. That’s fine. But it’s mostly when we’re out someplace and they come up and say, “Are you Matthew McConaughey?” and then our time is taken away. I understand it, and it’s not bad, but it’s really the one thing I don’t like.

DW: He’s moved back to Texas now so do you get a lot of time with him and the grandkids?

KM: He’s in Austin now. Yes, but I don’t go unless they ask me. (laughs) Right now, I’m back almost every Sunday. Levi and I are friends. He’ll call and say, “Ma-Macky, come to my house now.” So I may be his grandmother but I’m his fun friend most of all.

DW: Well, I’ve really enjoyed talking with you. This has been a lot of fun.

KM: The one thing I always say and have all over my house is: It’s All Good. I gave one to Matthew, a big sign that says, “It’s All Good,” and that’s the way we live.

DW: I can see that in him and in you, too. Thanks so much.

You can see K-Mac in the new film Bernie, currently in theaters. My review of the film is here.