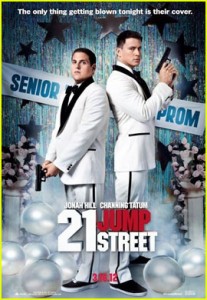 A Funny Thing Happened on the Way to a Movie I Didn’t Want to See, or How I Learned to Stop Worrying and Enjoy 21 Jump Street

I hated the TV show “21 Jump Street.” It’s not even worth discussing why. It just sucked in so many ways. I became a Johnny Depp fan pretty much the second he gave them all the finger and went off to make weird movies. I groaned when I saw the trailer for the big screen remake and I went to the premiere at SXSW under duress. And then a funny happened:  God help me, I liked this movie.

Let’s add to my reasons for trepidation the fact that I’ve been slow to appreciate the charms of Channing Tatum. Or to put it another way: until now, I could barely stand the sight of the guy, let alone entire movies that showcase his sub-par acting and hunkdom routine. That’s a little harsh, and I know that now because I’ve seen 21 Jump Street in which he displays stellar comic timing and only uses his good looks as the butt of jokes (not unlike Mr. Depp some moons ago.) Jonah Hill is consistently hilarious in the film, and let’s face it, Jonah Hill is consistently hilarious in everything. He can deadpan like no other and has a special gift for wringing belly-laughs out of awkward situations.

In addition to (surprisingly) excellent casting, the writers, Michael Bacall (Project X, Scott Pilgrim vs. the World) and Jonah Hill (with a story credit) have a lot of fun turning the typical high school stereotypes on their heads. Schmidt (Hill) was uncool in school but a good student. Jenko (Tatum) was popular but not too bright. When they’re given the undercover assignment as high school narcs, now in their mid-20s, their phony names and personas get mixed up. Suddenly Schmidt is the cool kid and Jenko is the science geek. At first they have a hard time fitting in to their new cliques but gradually they acclimate, and this both strains their partnership and gives them a better understanding of one another. It also makes for some good comedy.

Another thing the film gets right is its self-awareness that the world really doesn’t need another retread, so it laughs at itself early to let you know they are in on the gag. When Deputy Chief Hardy (Nick Offerman) explains their new assignment, it goes like this: “We’re reviving a cancelled undercover police program from the 80s and revamping it for modern times. You see the guys in charge of this stuff lack creativity and are completely out of ideas. So all they do now is recycle shit from the past and expect us all not to notice.” Fortunately, from there onward the film picks up steam and surprises on almost every level.

Unlike the Reagan-era TV show that made me want to puke, this movie is ambiguous at best in terms of whose side of the “war on drugs” it wants to be on. It’s a party movie with lots of drug humor, but then the inevitable big bust at the end is supposed to feel like an accomplishment – not because we’ve been made to care about getting drugs off the streets – but because our lovable loser bro-duo achieved something. In truth, this movie made me wish the fictional synthetic drug in question was actually real, and that I could have some. Like now-ish. The drug affects users in several phases that are explained to us in title cards. Phase One is “The Giggs” (giggles), somewhere in the middle is “Over-Falsity of Confidence,” I won’t spoil the others for you because they’re hilarious, but it ends with “Asleepyness.”

In fact, the entire film is funnier than it has a right to be.

Naturally, some gags work better than others and they take it a step too far at the end with a bit that is more gross and stupid than anything. But more often than not, directors Phil Lord and Chris Miller hit  the right tone and deliver the yuk-yuks.

This film is NOT for kids. If you were a fan of the TV show (bless your heart) and you think it’ll be cute to take your kid to this movie, think again. The R rating is for real. Heed it.

P.S. The Johnny Depp/Peter DeLuise cameo is worth the price of admission alone.