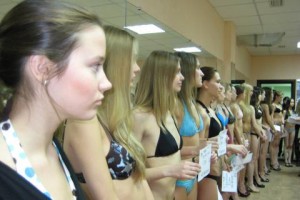 This haunting documentary opens on a huge ‘cattle call’ of girls from small villages in Siberia. They stand in bikinis, some with arms folded across their breasts, others with slumped shoulders, signs of obvious self-consciousness. They are here to audition for an opportunity to model in Japan, but most don’t look like future models at all. It looks more like a very large gym class lined up for weigh-in. They don’t flaunt or carry themselves in a presentational manner. No matter how pretty they may be, most of them look like gangly, innocent youngsters and that’s exactly what they are. As young as 13, they’re here because they dream of “getting out” and making money for their struggling families. But it will mean leaving behind everything they know and finding themselves in a strange land, at the mercy of a cruel industry.

When we first meet Ashley Arbaugh, an American scout who works exclusively for the Japanese modeling agency, she tells us she believes she’s “saving” these girls and giving them a chance in the west. But as we get a creepy feeling watching these minors being poked and prodded like so much market beef, and photographed in skimpy clothes so their bodies can be assessed and measured, Ashley fully admits that it’s the look of wide-eyed innocence they’re after. She then tells us that they pre-screen girls even younger than 13 in the villages. “Before anybody else gets there, we get the girls.”

A 13-year-old named Nadya is chosen from among the hundreds who showed up. She leaves her home for the first time and arrives in Japan alone at night and overwhelmed. When she makes her way to the apartment and flips on the light, it’s little more than a dingy dorm room she’ll be sharing with another girl. Already, the dreams and expectations are vividly juxtaposed with the harsh reality.

The film moves seamlessly between Nadya’s experiences and interviews with Ashley. As Nadya is brought before potential buyers to have her attributes discussed in a language she does not understand, she stands silent, confused and ashamed, from one rejection to another. Meanwhile, we learn that Ashley first came to Japan as a model much like Nadya. She hated it, hated the whole industry, but found her way into scouting and it’s this that allows her the large, cold, and sterile home she lives in alone.

Ashley is an enigma, at once claiming that recruiting these girls is “almost a religious matter” and in other moments admitting that there’s a fine line between modeling and prostitution, and she’s not entirely sure that some agencies aren’t actually scouting girls for the latter. “It’s selling your body either way.” Perhaps the most chilling of all her proclamations was the simplest one. When discussing “Messiah,” the 40-year-old Japanese man who books the gigs, she says simply, “He loves models,” and nearly chokes on the words.

Other memorable moments include the first time Nadya calls her mother and cries simply, “I want to come home,” and when her roommate Madlin describes being lost in Tokyo Station for 4 hours with no one there to meet her. But there are light moments as well. When the girls figure out that it’s a breach of contract to gain two centimeters in the waist and weight-gain would mean a ticket home, they promptly gobble up all the chocolate they can get their hands on.

The filmmakers, A. Sabin and David Redmon, do a fine job of letting the subjects speak for themselves. It’s ‘cinema verite’, the anti-Michael Moore. But if you look closely enough, a point of view emerges. Reflective surfaces play a prominent role in the film’s aesthetic, and little touches like making room for the Kate Moss magazine cover while the girls stand in a checkout line, let us know that we’re in the hands of careful storytellers.

Girl Model is a complex look at society’s fascination with youth and beauty, a sad glimpse into the shattered dreams of a young girl, and a complicated portrait of a conflicted woman. Thought-provoking and unforgettable, this is documenting at its finest.

Girl Model will be broadcast on the PBS series POV in 2012.

SXSW Interview: "Girl Model" filmmakers share a shocking secret about the making of their film
Next