“Terminator Salvation”….Save Yourself the Trip 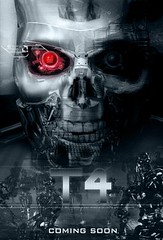 $200 million was spent on Terminator Salvation. They should have fed Africa. This was a story that did not need to be told, and with its shoddy execution, weak plot, and down right bad acting, should never have been. The entire thing seems like an afterthought, an appendix to the several video games available on the website (which also seem to have more personality), and the endless marketing opportunities that surround a painful bastardization of the original machines vs. man cult classic.

The film starts off with a ridiculously convoluted subplot that threatens to suck out all important substances from your brain. Never mind, you do your best to pay attention and make sense of it all until you realize about 30 minutes in that it really doesn’t matter either way and in fact, the possibility of a Muppet mating with Barney while eating their curds and whey and waiting for that cute little spider thing to come along would have been just as plausible a scenario to get the this movie rolling. And by rolling, I mean getting to the part where-we-can-spend-our-overblown-budget-on-blowing-shit-up. Which, after the initial set up, is pretty much all that happens and goes something like this: 2 lines of wooden, nonsensical dialogue, 10 minute blow shit up sequence, music swell, and repeat. The special effects are admittedly “cool as hell” (my inner preteen’s words). Creatively choreographed action scenes will have you jumping out of your seat. More than once I felt compelled to double check and make sure someone hadn’t slipped me those blue and red cardboard glasses as I dodged left and right to avoid the giant pieces of metal coming straight for me. Now if only the actors plodding mindlessly through their scenes could have demonstrated even a hint of that kind of animation. A particularly disappointing Blair Williams (played by Moon Bloodgood), dressed in Urban Outfitters-esque jewelry (one of several styling missteps, Markus’s “distressed” t-shirt being another) and perfect white teeth, is of little more use to the Resistance than those talking Mannequins in the Old Navy commercials. Linda Hamilton she is not, as she mutters something about kicking ass, right before the three slovenly men the threat was intended for overtake her in what appears to be the beginning of a gang rape.

“I’ll be Back” (please, don’t bother). “Come with me if you want to live” (I hoped they wouldn’t) and a naked rubbery -looking computer-engineered Arnold (unintended comic genius) are all hard evidence that this is in fact related to the original, but their haphazard delivery and random existence had many exasperated audience members glancing at each other with the same helpless WTF? expression on their faces. If this is the best the Terminator franchise has to offer, I’m rooting for the machines.

This weekend donate your movie budget to a charity.
Next