The 40th Anniversary of the Scariest Film Ever Made

Forty years ago today a movie was released that scared audiences so badly that it inspired an entire cultural fixation on horror – William Friedkin’s The Exorcist. In a time when movie tickets cost about a dollar, The Exorcist grossed a staggering $441 million, and it’s still among the highest-grossing films ever.

But why did The Exorcist strike such a chord with audiences? It’s a little difficult to imagine a horror movie having this kind of effect in today’s world, but that’s because so many films since 1973 have copied The Exorcist’s recipe for success: existential horror that eats at characters’ — and audiences’ — feelings of safety in their own belief systems, the fact that it’s based on a “true” story, and of course, nauseatingly convincing and gruesome special effects!

The Exorcist centers around the demonic possession of a young girl, Regan (played by Linda Blair), which strikes directly at the atheistic views of her mother, Chris (played by Oscar winner Ellen Burstyn). As the exorcist himself (played by Max von Sydow) comes to see that it’s actually a powerful demon, if not the Devil himself that he’s facing, Chris is also forced to accept that her worldview — and through her, that of “sophisticated” movie audiences the world over — must be totally upended to account for the undeniable evidence of this diabolical manifestation. In 1973, realism was strongly in force in mainstream cinema, and that realism combined with the incredible supernatural story spelled existential dread for audiences — and they loved it.

Adding to the realism in the midst of the fantastic was the fact that the events in The Exorcist were based on an actual 1949 exorcism involving a young boy in Maryland. Although the Catholic Church sent an exorcist (at the request of the boy’s family) and officially considered the case to actually be one of demonic possession, modern audiences were highly skeptical of such an occurrence being “real” … until they saw the movie, which portrayed everything so straightforwardly that many retroactively came to view the 1949 event as real as well. 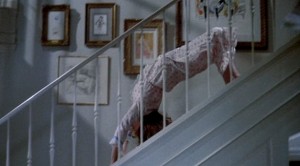 Part of why audiences could suspend disbelief so readily is that The Exorcist used groundbreaking special effects techniques that even today, when moviegoers are jaded and used to computer-generated effects, can look viscerally real – and of course are horrifyingly scary if accepted as such. Famous scenes like the one in which Regan “spider walks,” (only seen in the recently released director’s cut, since it was originally scrapped because the wires holding up the stuntwoman were visible) and particularly the scene where Regan’s head turns around 360 degrees as she taunts and challenges the exorcist, are hallmarks now of frightening cinematic imagery and have appeared in many other films in the 40 years since The Exorcist’s release. Modern cineastes must force themselves to remember that even if the effects, such as the “pea soup” vomit bursting forth from Regan’s mouth as the devil tries to break the exorcist and Regan’s mother, look somewhat crude by today’s CGI standards, they were extraordinarily convincing to 1973 audiences. 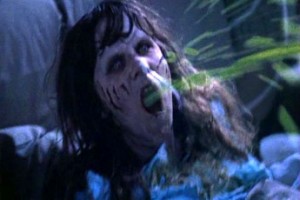 The success of The Exorcist led not only to several direct sequels to the film, but also to an entire subgenre of horror movies depicting demonic possession in everyday American settings. The cultural impact of this movie was such that a little known horror writer named Stephen King found himself receiving hundreds of thousands of dollars for the paperback rights to his first book, Carrie — later made into an influential Brian DePalma movie — and kick-started his career as a horror novelist.

Thanks to the spiritual and existential dread and horror that it both showed in its characters and produced in its viewers, combined with what today we would call a “viral” story about the true incidents that inspired the film as well as its groundbreaking special effects, The Exorcist is still powerful enough to scare audiences today, 40 years after it first appeared in theaters.