The Balcony that opened so many doors… RIP Roger Ebert. 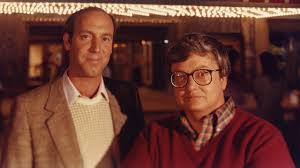 This news found me mid afternoon Thursday, I have been thinking a lot about it,  ever since.I have read many words about the man, about his contributions and how he fueled many voices to  enter in the dialogue about film. I  will  chime in  here and join    this illustrious list of    friends, colleagues and fans.   Above  all else, the main  feeling I have when thinking  about him is  GRATITUDE.

I grew up watching Siskel and Ebert, and was hooked almost immediately. It really intrigued me to see people discussing film in such a manner. I had not been accustomed to such a dissection of the elements of film. From their discussions I learned a lot about the history of film and began my own explorations. It didn’t matter whether  I  agreed or not with their decisions, it was  how they each  backed up their arguments. That is what I learned, how to support my believes on film with a history of cinema. Many years later, when I was starting the newspaper Austin Daze, Ebert was an advocate for other reviewers. He had come out in support of the online trend of reviews, and I thought that was very cool. He opened so many doors. I never got to meet Ebert in person, but many of my friends did, and I feel that he helped so many people grow into their professions. A few months after being in town I attended a QT fest at the Old-School Alamo. It was there, amongst strangers, that I was able to discuss films, even among characters such as QT and other famous directors. At that place, it really didn’t matter who you were, or what you had done, as long as you could hold your own and discuss the films with knowledge of other films. Thank you for the tools Mr. Ebert.   I am grateful for what Ebert has done in making criticism about movies mainstream, and for showing the world that with an understanding of the elements, then you can argue or have an opinion. This really goes beyond film…….

Wrong a delightfully absurd odyssey through the modern world
Previous

The Kashmere Stage Band at the new Antones
Next