The Bounceback: A delightful SXSW gem 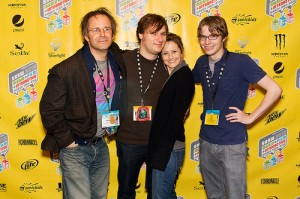 Despite the press, the fanfare, the crowds, and the hullabaloo the South by Southwest film festival is, at its core, still all about the discovery of the unknown. Though the party seems to get bigger every year, with more and more major motion pictures holding their premieres, red carpet and all, at our once little festival, it’s still the tiny gems, the movies that otherwise might never find an audience, that make the entire experience worthwhile and exciting.
One of those gems making its debut at South By this year is The Bounceback, a delightfully charming meditation on the process of moving on from past relationships, directed by Austin’s own Bryan Poyser.
The Bounceback follows the parallel paths of former lovers Stan and Cathy (Michael Stahl-David and Ashley Bell) as they attempt to navigate the tricky seas and awkward politics of post-relationship dating. Though we’re never told what precipitated the breakup, we’re led to believe it has mostly to do with the fact that he’s pursuing a film career in Los Angeles while she attends medical school in New York. Since it was a breakup of necessity more than incompatibility there are, of course, underlying feelings had by both parties. One day, however, through the power of Facebook, Stan discovers that his ex will be returning home from New York for a relaxing weekend with old friends as of the next morning. On a whim, he books a flight home himself in a sneaky attempt at rekindling their not-quite-dead-yet flame.
It is perhaps at this point worth noting that the home they are both returning to happens to be none other than the city you’re most likely reading this article in, Austin, Texas. And therein lies the wealth of this film’s charm. Just like we all have stories that begin or end with some variation of “this could only happen in Austin,” much of the humor of Bounceback comes from the general Austin eccentricities. In this way, the city becomes a sort of character unto itself.
For the most part, the weirdness of Austin is embodied by the characters of Jeff and Kara (Zach Cregger and Sara Paxton). Recently broken up former lovers themselves, Jeff and Kara each help their friend ease back into being single with often hilarious results.
One of the main arcs of The Bounceback involves Jeff’s quest to win the Air Sex competition (think of an air guitar competition…now replace guitars with sex…it’s that simple). Jeff, performing under the brilliantly unsubtle stage name Fuckasaurus Sex, channels all of his rage and heartbreak over his loss of Kara into what, in their own way, eventually becomes elaborate freeform interpretive dance routines chronicling the experience. Though it would be easy to criticize the film for spending too much time on the air sex scenes (and there is a lot of time spent on air sex scenes) they never ceased being laugh out loud hilarious.
The movie is not without its flaws. The script often felt somewhat forced and, at times, the dialog was a little stiff. And I have to wonder how much of the movie hinges on getting Austin. Though to me none of the characters seemed inauthentic or unbelievable, would I feel the same way if I didn’t know Austin and the people that live here? It’s hard to say how people unfamiliar with the quirks of our town and its inhabitants will react to the characters that populate this movie. In all fairness, however, I will attest that the characters and situations all felt extremely authentic to the Austin experience.
Anything negative I would have to say about this movie would still be greatly overshadowed by all the good things I have to say. Yes, at times the movie does have a tiny feeling of amateurishness to it, mostly in the script. But the cast does a terrific job at bringing the heart of this movie to light and the heart of this movie is, of course, the characters. Stahl-David and Bell are amazing as the opposing sides of the breakup and, despite having scant screen time, their combined presence paints an intensely accurate portrait of post-break up blues. Cregger and Paxton, as their guides into the new world of dating and hook ups, give brilliant and hilarious performances. And yes, it was kind of awesome to see Austin treated on film in the same way other films might treat New York or Paris; in many ways, The Bounceback is as much a love letter to Austin as it is a tale of the perils of post-relationship dating.
The Bounceback was an absolute treat and a very welcome addition to my South By agenda. In all of the general uproar surrounding the festival, it’s kind of easy to forget what it’s all about and why we’re all here in the first place. We’re all here because we love film and we want to see good ones. And The Bounceback is a very good film.