The Coveters – A Must See 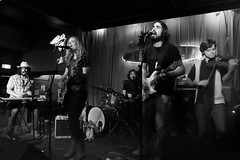 HERE WE GO AGAIN. This is yet another train that I caught late. Chances are that you have seen them, maybe heard about them. Whatever  the case may be, they are smoking right now. The show I caught on tuesdaze was magic. Everything jelled. These folks need to record this. I am all about the live capture. I know some folks disagree. But gathering these talents on a stage and having them play together and off of one another, well, thats just awesome and I think that this experience should be bottled and shared. Oh  how I miss DAZE ALIVE RECORDS. Anyway, these folks need to record if they have not done so already. This is a musician band. The talent is just overflowing. I guess  or I imagine that everyone came together at a party and hit it off so well that they just decided to make a magic band. However it happened. It did.
I knew of all the players but one and was impressed by her the most. Suzanna Choffel mixed in with great vocals and guitar licks that kept her on stage with the other guys. Her singing is a double edge sword it is smooth and draws you in but it also cuts in deep and you can’t help but to pay attention to her. Mesmerizing. She plays often in town,  I will check her out. On fiddle there is Warren Hood,   what can I say about this guy? He is a master musician for sure.   I have been fortunate to call him a friend and to watch him grow into an unstoppable talent. If  you are reading this, chances are you know of him and share the affinity for his  craft. If not, you  are lucky because he plays often when he is in town (on the road with The Waybacks often) and he will blow you away. Google Warren Hood 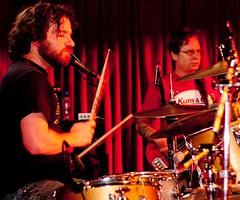 and The Hoodlems. Jeff Botta on Drums and vocals. Over the years, I have seen the many  faces of Jeff Botta in action. He is all  over the music scene here in  town. I  have become friends with him over the years. He adds the back beats & vocals and a sense of humor  to the players. Then there is Brad Houser on bass. This  guy is everywhere and playing  with everyone. From the Dead Kenny G’s to 7 Walkers, I am sure this guy plays multiple gigs almost every night.  My friend calls him the “secret weapon” and for good reason. Lastly, there was Ed Jurdi  on  keys. He normally plays guitar in  this outfit but he fills out the spot for Dan Dyer when he is awol (i could be wrong).  Awesome. I was  recently (very late)  turned on to The Band Of Heathens, which he is a part of.  I just went back and reread an interview we did with him. The sarcasm is still dripping. This band is chock full of humor. I bet practice is a riot. Ok, Dan Dyer was not  there last week. He is regularly on keys. I asked my photographer, Rockslide, to tell me something cool about Dan Dyer in this band. Rockslide texted back that “Dan has a sexy beard.”  Take that………… Dan Dyer has much god damn soul.

Get Thee to Momo's
Previous

T (TONI PRICE) AND C (THE COVETERS) SHOT BY ROCKSLIDE
Next