The Dog Days of War 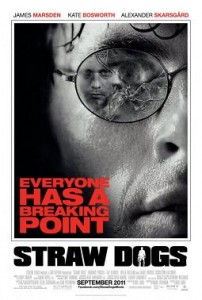 In 1971, Sam Peckinpah’s “Straw Dogs” was groundbreaking and controversial. It was the director’s first non-western but it employed many of his trademarks including graphic violence and machismo themes. What it really had going for it was the novelty of the story’s structure, which starts slowly and builds to a brutal and shocking climactic battle.

Since then, revenge thrillers have become a staple at the multiplex, and therein lies the challenge for this remake directed by Rod Lurie and starring James Marsden and Kate Bosworth. The novelty for this sort of thing has worn off and like a drug that one develops a tolerance for, it takes more and more to shock an audience.

The remake involves a young couple, screenwriter David and his pretty actress wife Amy, who move into her old family home in small town Mississippi so that David can get some writing done. It doesn’t take long for David to rub the locals the wrong way. He’s one of those smart-alecky city slickers whose sneakers don’t have laces. His wire-rim glasses are a dead giveaway that he needs his ass kicked, apparently.

The locals are a hodgepodge of cliché – a crotchety town drunk and former head football coach (played with very broad strokes by James Woods), the “slow” one who may have inappropriate urges toward little girls, the wife’s high school sweetheart played by Alexander Skarsgard (best known as Eric Northman in HBO’s “True Blood”), and a gang of redneck buddies.

There’s a lot of red state/blue state tension going on that’s meant, I suppose, to give the film some depth and relevance. Ultimately, though, it’s just the story of a wimp who gets pushed too far and finally fights back.

The centerpiece of the original film was a frustratingly ambiguous rape sequence. Due to the overly revealing trailer, it’s no spoiler that the rape sequence remains in the new film as well, and this time it’s only slightly less ambiguous. Indeed, if judging by this film, we haven’t come very far since Peckinpah’s 1971. Women still aren’t sure if they want to get raped by their ex-boyfriends or not, and under-aged girls are responsible for seducing older men. I wish I could say “we’ve come a long way, baby,” but I guess not. The only real difference here is that there is at least a moment or two of female empowerment that almost make up for the questionable sexual politics beneath the surface.

The story chugs toward its climax as David takes his lumps, each more humiliating than the last. The catalyst for the siege on the farmhouse is quite affecting, but then the redneck boys go too far and begin to act in ways that seem wholly unmotivated. At a certain point, there are multiple characters in this fight who have no motivation to participate whatsoever, yet they are relentless and seemingly unafraid of any county, state, or federal law in existence, let alone personal bodily harm. They have to, just HAVE to keep a’comin’ long after it no longer makes sense that they do so. This is an obvious plot contrivance, but the thrills are coming quick by now and perhaps the hope is that audiences will be distracted enough not to notice.

The town seems to have only one black person in it, and wouldn’t you just know it – he happens to be the sheriff. He’s also a damn nice guy, but is woefully ill-equipped to deal with the unraveling situation. Late in the film, it appears as though he’s the only law officer in all the land. It must be a lonely job. This is another contrivance that is necessary to make the climax “work” – David and Amy have to be on their own against the relentless attackers. There is no backup on the way. So, naturally, David has to prove “he’s got some man in him, after all” and protect what’s his – the house and the little missus.

As in the original film, where this offering succeeds is in the slow burn beginning, anger-inducing middle, and all-out war at the end. There is obvious foreshadowing that involves a certain prop, but you won’t guess where or how it comes in to play. Suffice to say that they put their heads together and came up with a “kill” we haven’t seen before.

If that sounds like a compliment to you, then this is your movie.

Side note #2 – Before the movie, we were treated to an 8-minute preview of the upcoming American adaptation of “The Girl with the Dragon Tattoo.” It looks very promising. Stay tuned.

Interstellar Transmissions, the band from Earth playing music from the Cosmos.
Next