“The Hangover”…Yes, it’s that kind of movie–in a good way. 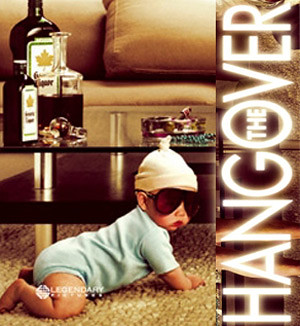 Two comments were heard repeatedly from the audience at the screening of The Hangover: “That shit is out!” and “This is every man’s worst nightmare.” Both, were alarmingly, hilariously true and could easily have served well as the film’s interchanging poster slogans.

The Hangover is a genuinely committed, gross out, raunch-fest comedy, that if at times uneven, never succumbs to sentimentality or sap. This is no small feat considering the premise which is about as formulaic as they come: A crew of  friends go to Vegas for a bachelor party that goes all wrong.   Part of its success is the fearlessness with which they push the dark-comedy envelope. Part of it is the treatment of the whole  buddy movie/road trip and their ability to embrace one of the most worn out plots in film with a  a  we-know-the-concept-sucks-but-trust-us sensibility that seems to motivate the filmmakers to stay one step ahead of its audience’s we’ve-seen-this-before expectations.

Following on the heals of that other comedy about a delusional man-boy, Observe and Report (which had the unfortunate task of following on the heals of the other comedy about a mall cop), the story for The Hangover is set in motion by Allen (Zach Galifianakis ), the brother-of-the-bride whose overzealous desire to be part of the crew takes them on a life- altering path of destruction.  Zach undeniably steals the film with his dead pan psychotic behavior and stupidity, leaving the rest of the cast with the responsibility of either reacting to him or whatever situation he has managed to get them into. This is not to say they don’t hold their own and Justin Lee Bartha, Bradley Cooper, Ed Helms  each seem to fully inhabit the “man” they are assigned to play.  This should be a breakout film for much of the cast who up until now have been putting in time with romantic comedies, TV, and the stand-up circuit.  Heather Graham turns up as a funny, sweet, stripper but still a far cry from her heart stopping power in Boogie Nights (undeniably, a big-picture career disappointment role, but don’t think too much about it).

A few editing choices leave you scratching your head, a few moments feel stalled, but most leave you smiling with appreciation at the love of comedy,  laughing a   “that was fucking brilliant” laugh, or shaking a  “Did that just happen?” head .  And the end, well, it is downright ridiculous.  In the best way possible.