The Kashmere Stage Band at the new Antones 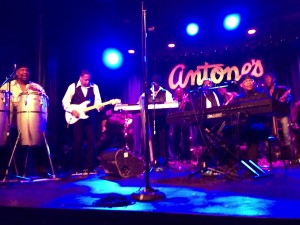 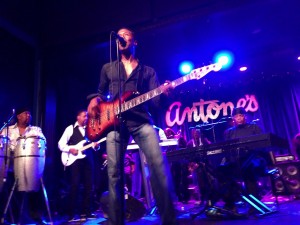 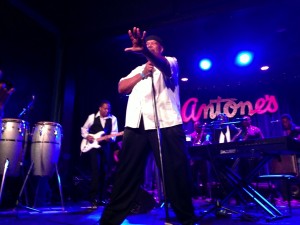 Last night was my first experience at the new location of Antones, on East Riverside. The new venue is sweet! I will be back . There are three levels now, and two floors. I did not explore much as there seem to be many steps  and I ride a wheelchair. My spot was right in front of the stage, the only place I dig. It seems like the stage at the new venue is deeper. That means that more people can get on the stage, and for The Kashmere Stage Band that’s a  good thing. They are a massive band. The last time I saw The Kashmere Stage Band was at the old Antones location, the whole band could barely fit on stage. Last night the set-up was ideal: the horn section and base player were placed behind the keyboards, there was a microphone set front and center,  so that different members could come forward and do solos. I feel that the band was bigger  (more members) last time, but maybe I think that because the stage is bigger.The last time they had a big  band/orchestra feel. Last night it was pure  funk. It was a very fun night. They proved the funk. They played much of their stuff, and then went into a couple of classics that the audience sang along with like “I wanna take you higher” and “Thank you for letting me be myself”. This band is one that needs to be seen live. A few years ago there was a documentary made about them called “Thunder Soul” I recommend that you check it out. I hope to see you next time.

The Balcony that opened so many doors… RIP Roger Ebert.
Previous

Hardproof and Rebirth Brass Band at The Belmont
Next