The Truth Goes Up in Flames 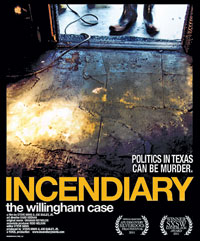 The anti-intellectual movement in America is alive and well and very dangerous. It works its way into our institutions, social conventions, politics, and even the justice system. It opts for easy platitudes over complex details, broad generalizations over individual circumstances, quick justice over painstaking procedure.

Take The Willingham Case, for instance. Cameron Todd Willingham was tried and convicted of burning his three daughters to death based on faulty arson investigating techniques that were later proven invalid. Science is a nasty little nuisance in this case. Why complicate things with chemistry and forensic science when there are political careers to protect that depend on the infallibility of Texas Justice?

“Incendiary” is not an anti-death penalty movie. And it doesn’t seek to convince you of Willingham’s guilt or innocence. In fact, it’s pretty straight-forward about Willingham not being such a great guy. Its aim, though, is to shed light on a “justice” system that is so flawed, so full of self-serving motivation and political maneuvering, that even incontrovertible evidence is suppressed and willfully ignored at the highest levels.

Here’s the deal: Willingham woke up to smoke and fire and ran outside. His three small children were inside. Numerous reports state that Willingham had to be restrained in order to keep from going back into the house to save the children. He was handcuffed and strapped to a gurney in order to keep him under control. The children burned to death. Willingham was charged with arson. There was no motive, except that he’d been known to knock his wife about from time to time and he had no job. He wasn’t a particularly popular guy, so it didn’t sit well that he survived a house fire that killed his kids. Fire Marshal arson investigators determined that an accelerant was used. Willingham was convicted… and put to death.

Here’s the problem: arson investigation changed drastically in the 12 years that Willingham was incarcerated. Think of how DNA evidence changed murder investigations, and you’ll have some idea of the leaps that forensic science has made in arson detection. Statistically, arson cases took a nose dive after the new protocols were put into place. This of course, does not mean fewer people are committing arson. It means a lot of people were wrongfully convicted in the past.

An appeals court never heard about the science in the Willingham case and Governor Rick Perry’s office rejected a report by arson experts out of hand before Willingham’s execution. The assumption was that the governor “couldn’t understand” the complexities of the scientific findings.

That’s frustrating, but it’s not nearly as troubling as what happened AFTER Willingham was killed.

In 2009, the Texas Forensic Commission (made up primarily of scientists) was set to hear that same report in a meeting related to arson investigation protocols. The hope was not only to possibly clear Willingham’s name posthumously, but perhaps in a broader sense, help establish a system that did not allow vital information to fall through the cracks. This meeting was an opportunity for the findings in that report to come to light.

Three days before the commission gathered, Rick Perry, in the midst of a re-election campaign, replaced three of its members, and appointed a personal friend with no scientific background to head the commission. What followed was blatant obfuscation and outright treachery aimed at concealing the mistakes made in the gathering of evidence against Willingham.

Directors Steve Mims (a documentarian and lecturer at UT) and Joe Bailey Jr. (a former student of Mims’) do a great job in letting the politicians inadvertently reveal their true agendas. Each time Perry calls Willingham a “monster” in that folksy accent and suggests that looking at forensic evidence is just stirring up a hornet’s nest or political posturing by those pesky anti-death-penalty wingnuts, it becomes uncomfortably clear that he’s really just protecting his own record.

For those naïve enough to believe that everyone on death row gets a fair trial and a thorough appeals process, this documentary will be an eye-opener. The system could only work that simply if careers didn’t depend on convictions, but they do.

Last month, a GOP crowd burst into spontaneous applause at the mere mention of Governor Perry’s 234 executions. Make of that what you will, but I’ll say one thing: Rick Perry understood the report well enough to know that science was his enemy. Dispassionate reasoning is the last thing we want to encourage when a man’s political aspirations are at stake.

"Aardvark", a Fantastic Fest Review
Next