The War On Drugs – Taping For Austin City Limits 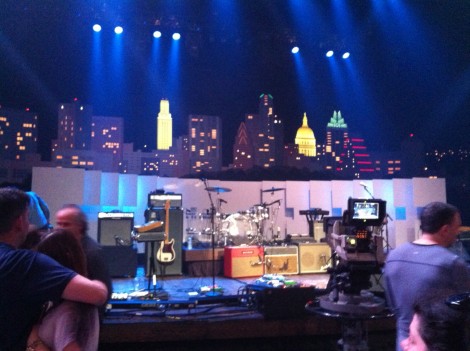 Yesterday, Russ and I went to the ACL taping for The War On Drugs. The War on Drugs is a fantastic band from the city that I used to call home, Philadelphia. Their latest album Lost In A Dream was crafted near perfect, in my opinion, and was one of my favorite albums of 2014. I was pretty excited to finally get to see them live. They played songs spanning their entire career from Lost In A Dream, all the way back to Wagonwheel Blues. The set started out with the first song off of their record, “Under The Pressure” which set a great tone for a great live show. Hearing the record in full continued to blow me away more and more with each listen, but actually seeing Adam Granduciel and the band play it live made those songs hit even harder. Adam’s guitar solos are atmospheric and so big. To hear him play in a venue like the Moody Theater was incredible. All of the songs played were amazing, but some of the standouts for me were “An Ocean Between the Waves”, “In Reverse”, “Lost In A Dream”, “Eyes to the Wind”, and the final song of the set “Suffering”. All of the guitar effects, keyboard melodies, saxophone riffs, harmonica solos, lyrics sang, and lively drumbeats seem so meticulous and deliberate with this band, while also sounding incredibly natural and free flowing.   It was a very well done show by an extremely talented group of musicians.

Another Great Saturdaze of Music!
Next