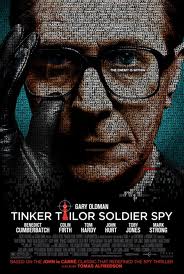 George Smiley never smiles. In fact, it’s hard to know what he’s thinking or feeling behind a carefully measured gaze which one must surely learn during the course of a lifetime of service to British intelligence. It’s likely you’re hearing Gary Oldman’s name a lot lately due to richly deserved award nominations. The great challenge in this role is to allow the audience to track Smiley’s arc and thought processes without giving it away to those around him. It’s a complex and sad performance that Oldman wears like an old suit. The furrowed lines on his face tell the unspoken story of the sacrifices that one makes in the personal realm when opting for a life of service to country.

John LeCarre’s classic spy novel has a loyal fan base that will likely be pleased with the film. It doesn’t have the time to explore the complexity of the relationships of the four spies in the same way the British mini-series was able to, but it captures the deeply layered essence of the book as well as can be expected in its 2 hour running time.

“There is a mole.” The words are spoken ominously by John Hurt who plays the character simply named “Control” with the sort of world-weariness one might expect from the head of British intelligence. It’s the 70s. The Cold War is raging. And it seems that someone in the higher echelons of her Majesty’s government is working for the other side. George Smiley is tasked with investigating this convoluted web of double agents and deceit.

It’s a challenging film, to be sure, in that it asks the audience to absorb a great deal of information early in the story that is laid out in very subtle ways. The uninitiated are likely to feel at sea for too much of the film, and this creates an emotional distance that is difficult to overcome. The deliberate pacing is likely to alienate some as well. One learns a lot about spycraft from “Tinker Tailor Soldier Spy” and part of the lesson is patience.

That said, for those who are willing to take the time with the film in the same way that you might curl up with a good book, get cozy, and lend your mind fully to detail, the rewards are rich indeed. For example, when Smiley finds a set of chess pieces fitted with the faces of possible mole suspects – his own face among them – the scene is not filled with expository emoting about betrayal, trust, fear, a lifetime of possibly misplaced loyalty. Instead, director Tomas Alfredson (“Let the Right One In”) opts for a simple close-up on the character as this stream of thought must surely be flooding through his mind.

The cast is a veritable who’s who of the best character actors working today (too many to list) with Colin Firth among them as the bona fide movie star in the bunch. He holds his own amongst these heavyweights of “actors’ actors” and then some.

But in truth, I suspect “Tinker Tailor Soldier Spy” will appeal to those with rarified tastes only. Others are likely to find it an impenetrable labyrinth of spy genre fetishism. If that doesn’t sound like a fun challenge to you, then this probably isn’t the best choice for your multiplex outing.

Still, what a joy to see Oldman at his best.

The Devil and Paramount Pictures
Previous