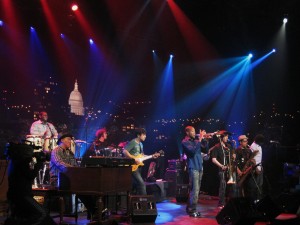 Trombone Shorty is not all that short anymore, but you can see how he got his nickname in this photo by clicking here. This historic Michael P. Smith photo from Jazz Fest 1990 shows a 4-year old Shorty playing the trombone with Bo Diddley looking on. You know Bo, an originator of Rock-n-Roll. Shorty hung with him at age 4.  Before being christened “Shorty” he was born as Troy Andrews. Then big brother saw the little guy with a horn in a street parade, and shouted “Trombone Shorty”. The nickname stuck, even when Troy grew up tall and made a name for himself playing trumpet.

So who is Troy “Trombone Shorty” Andrews? Well for one thing, he’s a man generating a lot of  word of mouth buzz right now. He’s 24 years young, but has accomplished a lot. He’s toured the world as a horn player in Lenny Kravitz’s band. He’s had primetime acting gigs on NBC’s “Studio 60” and HBO’s “Treme”. Last year, he was the youngest artist ever to be featured on the prestigious Jazz Fest poster. He’s got a hot new album produced by Galactic’s Ben Ellman that was the highest selling record at Jazz Fest. His band is in demand and currently booked at several world class festivals from Japan to Brazil to the Austin City Limits Festival in our own backyard.

All the accomplishments make it evident that whoever’s managing the Trombone Shorty machine is doing a great job. While the press kits hype his TV shows and high profile gigs, they leave out one thing worth mentioning: Shorty comes from an impressive musical family. His big brother is James Andrews, a trumpet player and leader of the New Birth Brass Band. His cousins Glen Andrews and Revert Andrews have funked it up with the Rebirth Brass Band. His first cousin Glen David Andrews is a rising star leading his own traditional jazz band. Higher up the family tree you’ve got Shorty’s grandfather Jesse Hill, famous for his classic R&B song “Ooh Poo Pah Doo”. You may ask “Ooh Poo Pah Who?”, but just trust us, or google it, cause in 1960 Shorty’s grandfather had a top 5 R&B hit. Don’t let the word “grandfather” throw you off. Jesse Hill was a playa in his twenties back then, just like Shorty is now. Taking the nation by storm at an early age seems to run in the family.

How did Trombone Shorty get booked on ACL? Let’s thank producer Terry Lickona for that. Introducing the band, Lickona said he went to the New Orleans Jazz Fest this year “to get inspired” and was impressed with Shorty’s sounds. Austin audiences might not be familiar with Trombone Shorty yet, but they will be. ACL deserves praise for this unique booking. Shorty’s band, which was clearly having a good time at the taping, includes drums, percussion, bass, guitar, alto sax, baritone sax, and backing vocals. Ivan Neville handled B3 organ duties as a very special surprise guest for the entire evening.

The band rolled through more than 90 minutes of songs from their Backatown and Orleans & Claiborne releases, with a few well placed cover songs. Working with both trumpet and trombone through the lengthy batch of original songs, Shorty even handled a few vocals, notably on his new song “Something Beautiful”. Somewhere around mid-set, Shorty called an audible and announced it was time to go way back and get funky with a few songs that weren’t on their planned setlist. One of the “way back” funky songs was from James Brown. Shorty does a perfect James Brown impression, with fancy footwork twists and swaggering control of the mic stand. It was so energetic the crowd all got up on their feet. All of them. Even the ones up on the top row that usually just stay seated and politely clap. It explained why he changed up the setlist – if I could pull off James Brown moves like that, I’d find excuses to do it every night. Once the applause died down, Shorty said it was time for Ivan to do one. Ivan looked over at Shorty and said “What? I have to follow that?”.  Ivan managed nicely though, with lead vocals on a solid rendition of the Earl King/Longhair classic “Big Chief”. The sounds made on the B3 organ drew in a circle of cameramen, stalking Ivan for a good shot of his hands tearing up and down the keys. For the encore, the band ended the night with some home cooking, leaving the stage and forming a second line through the crowd on the floor.

When Shorty plays he puts all he’s got into it. He does like to showboat and be the center of attention, but that’s not what’s driving him.  He steps up to the mic and wails on his horn because he represents his town, his neighborhood, and its way of life. He gives it all he’s got, cause he’s bringing his neighborhood to the World. A sense of place is an important part of New Orleans music. The Treme, Backatown, Orleans & Claiborne: these are the streets where music is born. These are the streets where parades got him started in music at age 4. Every decade someone comes along and keeps the tradition alive with a fresh new approach. Right now that person is Trombone Shorty. During the taping, Ivan Neville called Shorty “the present of New Orleans, and the future of New Orleans”. Well said.

The future of Austin City Limits continues in October, when Season 36 debuts. Stay tuned to www.austincitylimits.org for updated schedule and episode info. Don’t forget to Tivo this Trombone Shorty episode, or better yet, catch him live at the 2010 Austin City Limits Festival.

New Release By Flyjack "ON THE ONE"
Previous

One Monday Night at Momo's by Rockslide
Next