Yes, the Austin Daze was in Las Vegas this past weekend. I rolled out there and met my lawyer who opted for the role of photographer. Unleashed upon the city of sin, we were. My innocent soul was set ablaze by the bright lights and the flickering amount of excess. We were there to explore the wonderment, take notes and dive in (with journalistic integrity) whenever possible. The stuff I get into when The Publisher is away!

Upon arrival, I joined in the massive shuffle from gambling mecca to gambling mecca. Like some sort of crazy line dance, up and down the string of lights and re-created world landmarks. Each Casino was more elaborate than the last. Each pulled me in with promises of love and something greater. It was like a grand mirage. Each place offered the sense of going to another place without jetlag, but with the same price. Not up front, but the goal is to empty your pockets. It is done as the lights and music caress you. When you are empty, the place has no use for you and it is all you can do to scramble back to your rented nest without scraped knees and elbows. 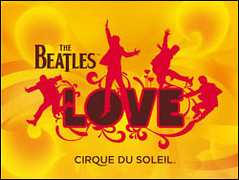 The next day brought pancakes and a trip to see the most amazing show, LOVE with Cirque du Soleil. It was a sensory overload.. A revelation filled experience set to the music of the Beatles. The venue was huge. The were so many things happening within the show that I only focused on one or two of the acts within each song. Could see it again three more times and still not catch everything. The lights going on in this show flickered like planets in space. I felt a comfort and a message that I had not seen earlier. “ Keep it moving, everything is alright and is going to be fine,” they kept intimating. With a smile of near silly proportions, I ventured out into the busy Vegas night. I had a more positive outlook than the previous night and found myself emerging through a crowd of sharp dressed folks to a rope, being pulled back, to let be through. They must have anticipated my arrival. I had lost my lawyer but I proceeded valiantly on to the depths of this niteclub.The inside was vast and spilling over with dancing and mingling bodies. Not my normal scene but I pressed on. Women were swinging on trapeze. I shook a few hands and began the ascent. My lawyer was waiting for me outside. We wandered through the ringing maze and skated back to our room.

Morning arrived. Pancakes again, then back to sleep and then up and out to the Palms to do the famous Playboy Mansion Party called The Midsummer Night’s Dream 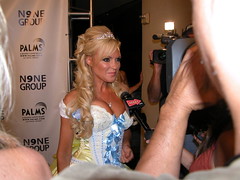 Masquerade Ball. Apparently, Hef has a suite at The Palms. This resort was one of my favorite places in Vegas. I sported my suave attire and brought my required mask. It took some fancy footwork but after a few near misses we were in and taking pictures of gorgeous women and famous people in masks, poolside, in a kings court. They spared no expense making the grounds kingly. 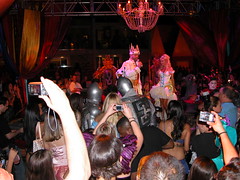 The event sold out for the 2nd year in a row. Scantly clad, beautiful ladies were everywhere. Like the night before, there was almost too much going on. No complaints here. It was like a dream. I could’ve stayed longer than I did but a force was pulling me on. I love my job.

Vegas was crazy. I had a good time surfing and breaking the rules and waves of the masses.

The joy that came over me as we landed in Austin was massive.

Back in one piece, only slightly, more corrupted…

**pics by JGS (MORE IN GALLERY)

Please Vote for The Austin Daze in the Chronicle Poll
Previous

The Nike+ Human Race
Next