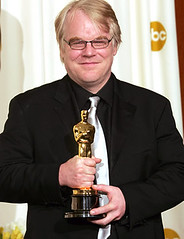 Philip Seymour Hoffman, mythical beast, appearing larger than life, to brood, contemplate, reflect, sometimes, if it strikes him, to offer up a deviling bit of comic relief. He roams the screen and the stage, layers of skin peeled back or removed entirely, discarded in a dressing room, relinquished to a trailer, emerging from these tucked away places as inner tissue and arteries whenever duty calls, thinking nothing of giving up the last shocks of his nerves to convey a point, a theme, a message–all in the name of being human.

It was with great anticipation that I arrived at the press suite on a cold morning in Manhattan for the interview with Mr. Hoffman as part of a press junket for Pirate Radio, the British import comedy by Richard Curtis. I had been dreaming about this interview since I first got into this profession. Waiting for Philip, I even named it. In my dream we were sitting in a coffee shop in the West Village (a real diner-like thing not the cozy lounge ones they have now) getting to the heart of it. “When you say ‘panicky’, do you mean mortality?” I would ask. The wait was finally over with a round table for this press junket. And while I knew it wasn’t quite the same (15 minutes, one question each), it held the promise, the possibility, of getting to know the man behind the mythical beast.

He enters. Shackled and unwilling, taking a decidedly side-ward seated posture, dagger eyes and grimacing mouth erect and poised to keep us from him: Mr. Hoffman had brought the beast.

We smile. He grunts. Battle lines are drawn. And it begins.

The rules of engagement are this: 15 minutes, the beast willing to be tied down, each of us given a line of rope by which to tie him. It’s a handicapped advantage but only fair considering the match up. One by one we take our place. And with those dagger eyes, he dares us to take our best shot.

Journalist number 1 fires confidently, “If your house was burning or whatever, what record or music would you absolutely have to take with you.”

The beast’s eyes flicker with contempt. “I wouldn’t do it.” Waiting for her to feel the burn, he continues, “I would be thinking of other things. Like my family.” With this, he clenches his right fist, snaps the rope, sending it and the unsuspecting journalist through the window of the press suite. Impressively, she catches the corner of the sill, dangling but determined, “What about your favorite music? That you had discovered on the radio when you were growing up?”

There is flash of submission, triggered by the memory of childhood. She seizes the opportunity to climb back into the room, taking her place -again, smartly abandoning what remains of the rope.

“I like so many different types of music because all I really did was listen to the radio as a kid.” He tells an eager room. “I didn’t really buy LPs or go to concerts or-I wasn’t really a connoisseur in that way–I would sit in the back of the car and listen to the radio in the summertime. I was that kid. I was introduced to a lot of different type of music without any of it being shoved down my throat.”

The second journalist, now his turn, fearlessly jumps in, “And yet interestingly, you have played two seminal characters who really understand the essence of rock and roll.”

Nostrils flare. The beast’s head cocking abruptly to meet the assaulting voice, “‘Seminal’. I wouldn’t say ‘seminal’.” He uses his newly freed hand to yank the rope leading to journalist number 2, momentarily amused by a game of human Paddle Ball, with one final swat, he plunges him through the walls of several neighboring suites.

Those of us that remain unite in fear.

The third one offers a huge beaming “nice kitty” smile for which the beast returns a mouthful of fangs, “What did you like or not like about living on the boat? Did you like living in those tiny little bunks?”

Gleams of white daggers flashing, “I showed up two weeks after they had already been shooting so I missed out on the fun-I never slept on the boat.”

We wait. Nothing. He is distracted by something caught in his front fang.

She braves, “So you’re not a cruiser.”

Removing what appears to be left over flesh, an earlier press junket perhaps? “I’ve never been on a cruise.”

Silence. It takes a minute to realize the silence is mine. My turn. I’m Journalist number 4. Everyone waits. I readjust my hands around my rope, bracing for the snapping and flinging and bruising to come, “The first time I ever saw you perform was in Shopping and Fucking“, I quiver.

“That was a long time ago.” I don’t hear this or anything else. The energy I have committed to my survival has rendered me deaf.

“I find what you do to be exhausting.” I plod on, after what I imagine to be an appropriate response time. And then for the plunge, “Did you consider this role to be somewhat of a relief?”

While he considers my question, I consider throwing the rope back to him and voluntarily throwing myself out the window. It would save us all so much time.

His eyes narrow, seemingly undecided on whether to strike or stroke, he says, “It’s a real ensemble piece. So I think it’s part of that-you are sharing the burden which is kind of what the characters are going through anyway. I think the movie itself has an energy about it and they are looking to have a good time. Those guys are really truly funny guys so I didn’t have to do much. I kind of sat back and enjoyed myself most of the time.”

Before my fate can be delivered, Journalist number 2 limps back into the room, white plaster stuck to bits of dried blood in his matted hair.

“…And you really express that especially as the American that goes to England. What did you channel?”

The beast seems amused by his resilience. Throwing him a bone, “These are very successful and fun characters to play because what they stand for is not a person but a meaning-what they identify with. That’s all they are. It doesn’t have to be about rock and roll. You can be passionate about anything.”

Emboldened by the few minutes of calm, Journalist number 3 pipes in, “I understand you went to DJ school…”

With a suicidal laugh, “So you did nothing for this role, basically!” she snorts.

“Well, I did my own work.” He snorts back, mockingly. And with that, he grabs hold of her rope and pulls her towards him. He holds her body down, places her head between his forefinger and thumb, and twists it until it separates. Holding it up admiringly, he opens his mouth to swallow her still stupendously smiling head.

Journalist number 5, horrified, begins to squeak, “Where does your passion and energy for acting come from?”

The beast likes this question, enough so to forgo swallowing Journalist number 3’s head, tossing it instead into a corner of the room.

“I don’t know. I first had a great passion for theater as a patron. When I was 12 or 13 I was a huge patron. I loved it. I just did. Why that is, I don’t know. So that’s what it really still is. How I got on the other side of it? I’m still trying to figure out whether that was a mistake or not. I mean that in a half joking half serious way because my passion was truly seeing and watching-going to the theater. I really believe it is truly one of the rare gifts that we have, that our culture could offer a person. I learnt at a young age, which that has a lot to do with me becoming my creative myself-whether it be live theater or film. Why I’ve directed and acted and why it hasn’t just been acting. I have an interest in the whole thing, I’ve been interested involved in things that will hopefully give people reason to go like I have reason to go. ”

Is that a purr?

The newly freed head rolls from one side to the next, trying to steady itself. Blood sputters from its neck, “How did you find the experience of being in Othello? It’s such a long play. What’s your secret?”

He lifts his foot to stomp her out once and for all but then stops. He seems to be tiring, worn down by the relentless stupidity of it all. “There’s no secret. Long Days Journey into Night was longer than Othello. And then True West, we were on the stage for 2 hours straight and didn’t leave…”

Exasperated, he crouches down, resting his large head on his hands, “It’s an incredibly complicated situation. It’s very alive and full of traps and successes and joy and sadness and inspiration and dead weight.” Retreating now, shutting us out to be with his self, to be somewhere else, anywhere else, “It’s an incredible thing.”

Journalist number 2, sensing the moment of weakness asks, “You’re getting a lot of offers. How do you make the decisions about the plays and films you choose?”

Aggression drains from the beast’s hulking body. He searches our faces for a hint of the human he has strived so hard to capture all these years. We offer him nothing. There is nothing left to fight. “It’s organic. It’s something…you know…it is life.” Almost pleading, “It just starts to make sense to you. It’s intuitive. All this stuff. How we all got here in this room, is intuitive.”

Blank eyes blink in unison at him.

Journalist number 3, “How do you see the difference between British humor and American humor?”

There is silence. Then an exhaustive sigh of defeat. “I don’t know.”

With that, a sacred publicist mountain dog escorts him away and I’m left still waiting.