Werner Herzog takes us “Into the Abyss” 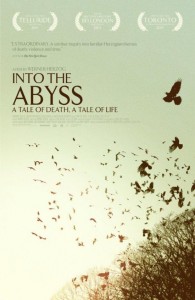 Here’s a pitch for a film:
Americana, desolate small town life, a mom baking cookies, a heinous crime, a honky tonk in a neighboring town called “Cut and Shoot,” a petty criminal who learns to read in prison, an obsession with a red sports car, a chase, a shoot-out, a fleeing felon yelling “balls to the walls!” as the bullets fly, victims left glaze-eyed in the wake of tragedy, an inmate’s wife impregnated in vitro style via contraband, a death house captain’s conversion experience, an incarcerated father who finds a way to save his son’s life.

Sound like too much? No one would believe it.

But this film is not fiction. It is documentary. Lord Byron was right about truth being stranger than fiction. It’s also more fascinating.

To look at the world through Werner Herzog’s eyes is to view human nature with insatiable curiosity. Indeed, the auteur has set his particular genius upon this task more times than we can list here, but some highlights include “Grizzly Man,”, “Aguirre: The Wrath of God,” and “Stroszek.” With “Into the Abyss,” he has wrought something unique and penetrating, yet again.

The documentary explores the aftermath of a tragic and senseless crime that took place in Conroe, Texas in October 2001. Two teenagers murdered three people for the sole purpose of joyriding in a shiny red car. The stupidity and cruelty of this act is impossible to measure (hence: the abyss), but Herzog does a good job of trying by interviewing the family members of the victims, who are heartbreakingly sincere and generous in sharing their pain.

This crime and its aftermath, though, serve as the backdrop to a larger discussion about the death penalty. This is not an activist film. It does not seek to exonerate the perpetrators; they are clearly guilty and the film wastes no time arguing otherwise. Instead, the point here seems to be simply to look and listen and learn what we may about a culture that breeds Michael Perrys and Jason Burketts, then kills them in the bizarre ritual known as state executions.

Herzog interviews the perpetrators of the crime: Michael Perry who was to be executed eight days after the interview, and Jason Burkett who is serving a life sentence. Perry’s cocky, unremorseful demeanor is stomach-turning, and Burkett’s restrained, dull stare is a harder wall to penetrate. Both men blame the other. Neither garner sympathy. But it’s fascinating to watch the depths of their denial mechanisms at work.

The film opens with a humble chaplain, a strong and sensible man who speaks of his experiences in the Death House with tears in his eyes. It ends with the surprisingly poetic musings of a former Death House Captain, who has seen more death than anyone ever should, and is now more interested in doing a good job of “living his dash”. It’s interesting that Herzog bookended the film with employees of the state.

There are no lawyers, no experts, no statistics, no politics. It’s not about that. Instead, Herzog interests us in the emotional toll of violence on all involved.

The footage is incredible: from the unsettling police video taken at the home of murder victim Sandra Stotler while the blood was still fresh on the floor and cookie dough on tin sheets in the kitchen, to the shoot-out location with the car shot to smithereens with glass and blood all over the place, and an untold number of bullet holes in the walls of the abandoned building they fled through. Later, the film takes us into the Death House, where rows of Bibles are placed at neat intervals alongside boxes of Kleenex, presumably for loved ones of those to be executed. Composer Mark de Gli Antoni’s haunting score accents these eerie scenes beautifully.

But perhaps one of the film’s most intriguing ingredients is Herzog himself. He doesn’t interject himself into this film as he did with “Grizzly Man”, but his voice is heard off-screen asking the questions, at times focused and penetrating, at other times light-hearted and personable. In the midst of such heavy subject matter, he can send the interview off on tangents in frankly delightful ways: a witness with a large tattoo of his girlfriend’s name on his arm is asked “What happens if the relationship unravels?” And upon learning that Jason Burkett still had a piece of the car lodged in his side after the shootout, “How do you get through a metal detector?” The film is peppered with these brief moments that give us a glimpse of how Herzog’s curiosity is simply his way of life.

The most moving sequence of the film involves Delbert Burkett (father of Jason), who is incarcerated across the street from his son in the same prison for unrelated crimes. Mr. Burkett’s lament about his son’s upbringing is what got Jason a life sentence, whereas Michael Perry (whose family did not come to his defense), received the death sentence. Mr. Burkett is humble, full of regret, and seemingly the only criminal in the entire film who accepts full responsibility for his actions. He wants to go back in time and be a good father so that none of this would ever have happened. But he can’t. Trapped in prison, trapped in time, trapped in guilt.

Every wayward young man in the film winds up mentioning relatives in prison (usually their fathers) and it becomes clear that the cycle of violence is a family affair. The film is rich with such themes that appear serendipitously. Another is the belief in God and some master plan amidst all the senseless violence and chaos. Another is the beauty of nature and how it can wrest us from our selfish lives to notions of something more. And then there is denial… always denial.

Denial is such a running theme in the film that it becomes almost a lead character. Without fail, every person interviewed – from the Chaplain, to the perpetrators, to the victims’ families, to near-victims, to the Death House Captain – every person in the film speaks of it. “I can’t allow myself to think about that.” “I’ve blocked it out.” “I’m not able to face that.” These words are echoed time and again.

In a country where most people have strong feelings about the death penalty (either for or against), it’s likely that most of us haven’t looked at it all that closely. This film, in a sense, is the opposite of denial. It looks with an unwavering eye. If you’re going to say you’re for or against something, you ought to bloody well know what it is that you’re really for or against.

Paradise Lost and Found
Next