With “FUNNY PEOPLE,” jUDD APATOW GOES 3 FOR 3 IN MY BOOK 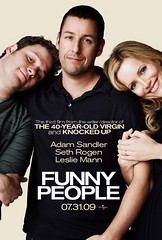 I loved this film. It owned me from start to finish. At the moment, most of my favorite actors are brought together and great performances are brought out from them by Mr. Apatow in this film. What we have here is a different sort of film. Sure it is still a comedy but there is also this testament to lost love and friendship going on. I was brought to tears a few times here. Yes, in laughter some, but also in the accurate depiction in some very tough scenes. This film is a next step for the director and take it smoothly he does. This a heartfelt dramatic film with a heavy dose of comedy sprinkled in. I love it when an artist tries something new. Here, we have Apatow exploring serious subject matter. He has te comedy thing down. I look forward to where he goes next.
Some will talk about the length. I was into the film so it didn’t bother me. It takes time to tell a good story.
I have been looking forward to this film ever since I heard it was being made. I  managed  to avoid all reviews and trailers.  I went in a virgin if you will.  I knew the actors and director and that was it.  I was sucked in. After the preview, I came home and watched the trailer. I  couldn’t believe what they gave away. Jesus! I am glad I missed it, and if at all possible try not to see it before you go. And go you must. Hands down,  this is the best film I  have seen this summer.