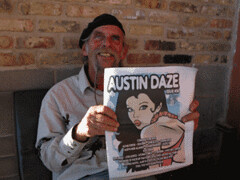 AUSTIN DAZE: How long have you been in Austin?

HJ: Well you know I’m a Rainbow, I go to lots of places but I always come back to Austin.

AD: What brought you to Austin?

AD: But why did you end up in Austin?

HJ: Oh. I was coming through from Florida and I was going to California and all my friends along the way kept telling me when I went through Texas to stop in Austin. So I did.

AD: And how long was that stop?

HJ: Well lets see…I pulled into the Armadillo about 3 o’clock on a Friday afternoon and I went to sleep and when I woke up the place was busting with people and folks were pushing me on the shoulder saying, wake up. I looked around and I thought I was in heaven. It was a wonderful time.

AD: So you didn’t continue on? You ended up just staying here?

HJ: I stayed here. I got a job and hung out and stayed and stuff and never thought to go any further west for awhile

AD: Have you always done embroidery?

HJ: I’ve been doing embroidery since the 60s

AD: What started that?

HJ:Well I was living in Detroit, Michigan and I had a friend who lived in Hamtramck who had an embroidery shop that he did work for bowling companies and laundry companies and all that stuff and he had a heart attack and he died.

Nobody expected him to die. He was all of a sudden, gone.
Well the customers that he had were all desperate for somebody to do their work and so I started doing it right away. It was probably quite a let down after his work. He was 38 and I was 21 and I just wanted to do something to emulate him so I just got a sewing machine and been doing it ever since.

AD: I’ve known you ever since you’ve been with Ruta Maya. I was wondering how you ended up with a spot there.

HJ: Oh well, in the older days, those guys were associated with Shiner of Austin Warehouse, and they moved beer and all that stuff. I knew all those guys from Thundercloud Subs and everywhere that we were together. It was a smaller more intimate town then and they were just friends of mine so when they started the shop it was easy for me to move in and they let me have the space and be Happy Jack.

AD: And you became part of the structure of Ruta Maya.

AD: You’ve seen many changes in this town. What would you say is the best addition and what is the thing you miss the most?

HJ: The addition: all of it has gotten too big. I think there are a lot of beautiful things that manifested out of Austin that only made it that much bigger. You know the SXSW: beautiful, Austin City Limits: beautiful. And of course it just goes on and on and on. And we’re trying new things all the time but they’re just all so big now compared to the intimacy that we had. I think it’s good for the world. Might not be so great for the community. The thing I miss most is when it was a smaller place. I loved the intimacy. Of course that’s why I hang out in the coffee houses cause we get to be pretty intimate here.

AD: It’s getting big but the community that we have here is amazing. You introduced me to really great people that supported the paper for a long time. I really appreciate that, man.

HJ: We were ever so pleased to see you extending your energy down on Fourth and Lavaca. That was beautiful as a place–It’s none of that stuff that’s there anymore. Not any of the places that were all so close to us back then.

AD: So you have to tell us how you got the name “Happy Jack” and who gave it to you.

HJ: Well, you know I do a lot of running and travelling around the country, with my Family at least. Except for the last couple of years, I ran with the Grateful Dead and The Rainbow Family of Living Light and they tagged me with that name. I would never have called myself “Happy Jack”. It seems inescapable now.

AD: I heard once that Peter Rowan called you Jack–he didn’t call you Happy Jack.

HJ: No, yeah, my more intimate friends call me Jack. That’s what my mother called me, you know?

AD: Where can people find you to get embroidery? What type of embroidery do you do?

HJ: Well, what I do is called free motion embroidery. It’s just a sewing machine that has a needle that goes up and down and I move it wherever it needs to be moved to make whatever it is I’m trying to make. Very simple. Very simple.

AD: Where can we find you?

HJ: I can be found at the Ruta Maya International Headquarters of 3601 South Congress, right behind the Expose. If you can’t find me at Ruta Maya I might be at the Expose. If my lights are on at the sewing machine I’m here somewhere. I socialize a lot so you’ll have to look around for me.

AD: Is there anything else you want to add?

HJ: Well only that I’m ever so happy to have you guys as part of our community. We all love the paper. It’s a good thing. And, your First Thursdaze parties have been incredibly successful, thank you so much.