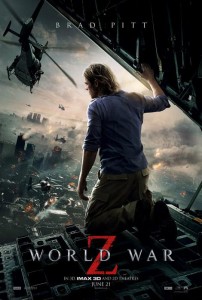 Based on the 2006 highly acclaimed novel by Max Brooks, World War Z is one of the summers most anticipated films, and will almost certainly infect the globe with its disease. The film industry seems plagued by the persistent need to re-hash the oversaturated theme of the “zombie apocalypse”, with 3D to boot. World War Z is not a carrier for reimagining this genre and it only contributes to the pestilence. The film rushes the viewer from the beginning, with barely any exposition of the outbreak details. Unlike other incarnations of Zombie flicks, World War Z does not seem focused on telling a tale of human survival (See the film 28 Days Later or even the television series The Walking Dead). The audience does not get to identify with the raw sense of human loss and anguish caused by the wake of the undead. Without this struggle and a lack of any complexity, World War Z just comes across as a predictable, formulaic mishmash of fantastical stunts and not much else.

Maybe I’m being nitpicky, but I cannot recommend World War Z to a zombie movie fan. Most zombie tales establish and outline their own canon for zombie engagement (The film Zombieland does a great job of this); Some zombies respond to different senses like sound or smell, some zombies are sluggish and clumsy, others are quick and calculated flesh eaters. Some can be dismembered and/or taken down with fire, and some require decapitation or direct attacks to the brain. World War Z casually introduces its own set of rules, but does not follow them well. These zombies quickly form hordes of ruthless climbers and can only be taken out by destroying the brain. Even the make-up and CGI are lazy, and if you wanted to take a good look at the swarm of zombies, viewing the film in 3D only adds blurry action sequences and nausea.

World War Z is an introduction to one random man’s journey, Gerry Lane (an exhausted looking Brad Pitt), who quickly gets his family to safety, and then goes on a search to seek out patient zero for the government spooks. It’s unclear why Gerry is the only person fit to the task, or what his role was with the government prior to the outbreak. When we first meet Gerry, he is merely a pancake flipping stay at home dad, but for some reason, his contemporaries are deeply concerned about saving his and subsequently his family’s life. With pointless travel points and impossible getaways, Gerry keeps getting out of sticky situations even James Bond would be impressed by; like throwing a grenade on a jet liner and somehow not getting blown out of the breach while being only one of two survivors in the following plane crash.

The viewer never has to worry about Gerry’s safety or anyone he cares about, which removes the attributes of fear and uncertainty. The film is dull and boring and cannot be saved by Brad Pitt or director Marc Forster (Monsters Ball, The Kite Runner). If you are looking for an action movie first and a zombie movie second, check out the Resident Evil series.

The Bling Ring Fails To Shine
Next