Wrong a delightfully absurd odyssey through the modern world 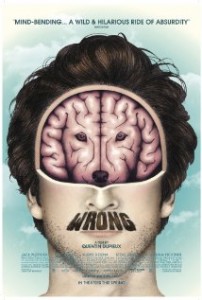 It’s not exactly a secret that cult-movie darling Quentin Dupieux doesn’t limit himself to the realm of realism; he first made his mark on the scene with 2010’s delightfully absurd Rubber, a film about an errant tire that gains sentience and psychic abilities and wreaks havoc on a small desert town. That film was deemed too weird for some audiences and was more or less snubbed by critics, though it did gain some traction in the rental and streaming market after its initial release. Which makes sense, given the surreal nature of the plot; it just wasn’t a film that was going to find mainstream success.
Still, when I heard that Dupieux’s next movie was going to be about a man on a journey to find his lost dog, I was forced to wonder if the surrealism would be toned down a bit. How bizarre could a movie about a guy and his dog actually get, anyway?
Apparently, the answer to that question is “very”.
With his latest film, Wrong, Dupieux manages to weave a remarkably well-layered tapestry of surrealism and absurdity into what should for all intents and purposes be a simple film about a man seeking his best friend.
In fact, there’s really not much to the plot beyond this. Lovable loser Dolph Springer (played by Jack Plotnick) wakes up one morning to discover that his beloved Paul has disappeared. This ignites for Dolph a personal odyssey that takes him through the absolute depths of the strangeness of our modern world.
His strange trip leads him to the prophetic Master Chang (played by the always remarkable character actor William Fichtner) who runs a company that kidnaps pets in an effort to make pet owners more appreciative of their furry friends. A bit of a self-help new age guru, Master Chang encourages Dolph to learn his techniques of psychic bonding from http://www.psychics4today.com/keen-psychics-review/.
And that’s pretty much it, in terms of hard plot. Narratively speaking, little else goes on in the story beyond the fact that Dolph really wants his dog back. It’s the absurd twists and bizarre surrealism that sell this movie and it, like Dupieux’s previous works, won’t be for everyone.
In this world, his neighbor has a problem admitting to himself and others that he is, in fact, a jogger; the fire sprinklers at his job run constantly without phasing employees; palm trees turn inexplicably into pine trees when backs are turned. Nothing about the world Dolph is trying to navigate makes much sense. The simplest interaction can lead down a rabbit hole of weirdness that takes you further down the spiral than you thought possible before, with often hilarious results. Just don’t get too caught up in wondering why anything is happening. This line of thought is a one way trip to madness that might lead to an aneurysm. Instead, it’s far better to just accept that it is happening, and move along.
In this sense, the audience and Dolph are merely extensions of each other. He is sort of like our spirit guide; if he can just accept that everything that happens in this movie is actually happening, then so can you. If you, as an audience member, have this ability than Wrong may be right for you. Acceptance is not always easy though, and this movie is not for everyone.
Wrong feels like the movie that would happen if Charlie Kauffman and David Lynch each ate an eighth of shrooms and decided to make a Monty Python movie together. It’s mythic in its scope and more or less doesn’t deviate from the path of the hero; its simple narrative belies its bizarre nature and is a true delight for those among us who actually manage to get it, with a subtle wit and humor that borders on the sublime.
If you don’t get it, however, I wouldn’t worry too much. You’re probably the normal one.

Worth the Admission
Previous

The Balcony that opened so many doors… RIP Roger Ebert.
Next